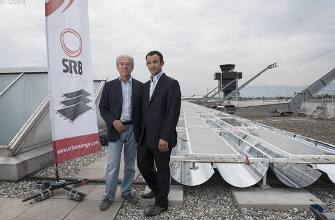 The roof of the Geneva International Airport has now 282 evacuated flat plate collector panels with a back-side metal reflector. These Ultra-High Vacuum (UHV) collectors will start working in winter this year and supply the airport with hot water and space heating. Next summer, the solar heat will run a York absorption chiller to cool the buildings as well. The manufacturer of the special collectors is Suiss-Spanish company SRB Energy. The costs for the installation, which was subsidised by the Swiss government, amounted to almost Swiss Franc (CHF) 3 million. The new system fits perfectly into the renewable strategy of the airport, which wants to cover more and more of its energy consumption by alternative energies. The photo shows Cédric Petitjean (right), General Director of SRB Energy, and Dr Cristoforo Benvenuti, Vice President and CTO of SRB Energy and former researcher at the European Organization for Nuclear Research (CERN).
Photo: CERN

The UHV collectors heat thermo oil up to a temperature of 130 °C. One of the collector’s key innovations is the glass cover on the top and bottom. It lets the panels absorb the radiation reflected by the cylindrical mirrors, which have been mounted to the back, too. “We wanted to save expensive absorber area, so that the current model of 4 m² of collector area corresponds to 2 m² of absorber area,” explains Petitjean. “UHV can reach a stagnation temperature of up to 320 °C and keeps the vacuum up to 10-6, even at 300 °C,” he adds. How does the design help maintain this high vacuum during the collector’s lifetime? “We developed our own coating without organic components to limit outgasing,” says the General Manager. The second important design element is the metal sealing with liquid copper. The third is the high-efficiency getter pump, which is incorporated into the casing next to the absorber. This aluminium deposition foil with 1 m² in size absorbs the atoms and molecules which are emitted while the collector is in operation. The surface of the so-called Non-Evaporable Getter (NEG) reactivates through heating. The solar energy on the getter pump causes the absorbed gas molecules to be pushed from the surface into the getter bulk, so that the surface stays ‘clean’. According to the manufacturer, this process will still work after the system has run for many years.

The vacuum technology was developed originally at Swiss research institute CERN. Benvenuti, an expert at vacuum tube technology who worked at CERN, came up with the idea of a vacuum-insulated flat plate collector, which was then patented in 2003. Manufacturing company SRB Energy was founded in 2005.Its headquarters and factory are in the Spanish city of Valencia. Automotive supplier Segura later invested in SRB and bought 91 % of the company’s shares.

The company started producing in series at the beginning of 2010. “At the moment, our Valencia location employs 30 people and produces 100 panels a day,” confirms Petitjean. One of the key processes in the production is the evacuation oven, where 20 panels rest for 8 hours linked to one vacuum pump. SRB realised a number of commercial jobs, of which the international airport in Geneva is the largest one. The company also delivered UHV panels for the air-conditioning of a warehouse in Murcia in southeast Spain. A process heat application was installed at Spanish company Pincase, which specialises in electro-coating of automotive parts. The UHV collectors there supply the paint shops with temperatures of 180 °C.