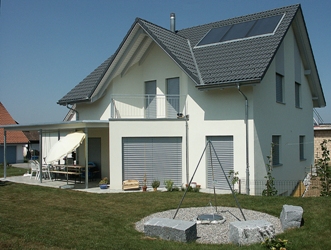 In 2011, the newly-installed collector area for hot water and space heating in Switzerland increased by around 1.5% compared to the previous year. This is the result of a recent market survey that has been conducted on behalf of the Swiss industry association Swissolar. A total of 100,000 solar thermal systems have been installed on Swiss roofs by now. But according to Swissolar, this number represents only a small fraction of the country’s solar thermal potential.
Photo: helvetic energy

On behalf of Swissolar, British market research company BSRIA has collected and analysed the 2011 data of 24 companies which account for about 60% of the Swiss solar heating market. The authors of the study then extrapolated this data to gain the following overall market figures (the BSRIA report has not been made available to the public):

However, record-high oil and rising gas prices are exactly the reasons why Swissolar considers the growth in 2011 as only a modest increase. David Stickelberger, Managing Director of Swissolar, explains the current stagnation in the solar thermal market as follows:

According to the Swiss solar industry association, the solar heat potential is enormous: a recently published study commissioned by the Federal Office of Energy assumes that up to 60% of the heat demand in the Swiss residential building stock could be covered by solar energy. Currently, the share is only at about 0.7%.

Considering such large potential, Swissolar is aiming to cover 20% of the heat demand in the Swiss residential building stock with solar thermal energy by 2035. This corresponds to an installed collector area of 2 m² per head (2011: 0.13 m² per head).

An increase of that magnitude would require additional efforts, such as an educational campaign among installers, binding solar thermal targets on the federal and the canton level, incentive programmes for larger solar systems (particularly in the area of multi-family houses and district heating networks), less barriers for homeowners, the establishment of a mandatory share for solar-generated hot water and the intensification of research activities towards reducing costs and improving long-term storage.

Since 2010, all 26 Swiss cantons have had their own financial support mechanism for solar thermal (see http://www.solarthermalworld.org/node/1591). Only the canton Schwyz has discontinued its programme in late 2011. Two other cantons, Luzern and Zug, have stopped funding the technology for now.

The proposed increase in the CO2 tax is also expected to have a positive effect on promoting solar thermal. The national parliament has already approved the regulation. “The final decision now rests with the Federal Council,” Stickelberger says. “An increase would mean that the amount of the so-called partial earmarking increases: One third of these revenues are used for energy-efficient measures and the promotion of renewable energies. Another third of the amount goes to the cantons, which can finance their own programmes with it. As a result, more funds to promote solar thermal may be available from 2013 on.”