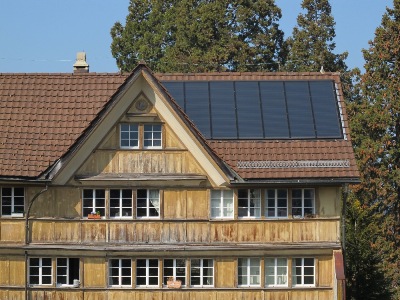 On 9 January 2015, the Swiss Conference of Cantonal Energy Directors agreed on nationwide model rules for building energy codes. These rules include a nearly zero energy standard for new buildings from 2020 onwards and a 10 % renewable requirement for heating system retrofits. Although Switzerland is not a member of the European Union, the country’s energy standards are similar to what the European Energy Performance of Buildings Directive (2010/31/EU) requires from member states.
Photo: Swissolar
In Switzerland, all building codes are subject to cantonal legislation. Similar to an EU directive, which needs to make its way into each member state’s national law, the model rules have to be substituted with Swiss cantonal law as well. Since 23 out of the 26 cantons voted in favour of the model rules, there is little doubt that they will become part of each canton’s legal system, although exactly this system may decide how long the process will take. In some cases, such as in the canton of Bern, most of the rules can be incorporated into cantonal law by means of ordinances. This will simplify the process and make the goal of having the majority of rules come into force by 2016 an attainable one. In other cantons, cantonal law itself needs to be modified, which will make for a more complex situation that requires parliament decisions or even referendums. In such cases, the process may take up to several years. The aim is to ensure that all cantons will have adopted the rules by 2018 and that the rules will have become law across the entire country by 2020.
Renewable obligation for heating retrofits pushes solar thermal
Once the bill is passed, the solar thermal industry will probably devote most of its attention to the chapter on heating retrofits (see page 34 of the attached document). Whenever a heating system is replaced, the building owner will be required to cover 10 % of the energy demand by renewable sources, either by installing a new heating system or adding insulation. Instead of individual proof of the correct percentage, the authors of the aforementioned document suggest several standard options, with a domestic hot water system being the simplest one. “We expect this to have a very positive effect on solar thermal,” David Stickelberger from Swissolar says. The standard solar collector system will have to be at least 2 % of the heated building area, e.g., 4 m² of solar collector area is required for a 200 m² building. Such a system is said to cover half of the domestic hot water demand which is around 20 % of the annual energy demand of the building. “This standard solution is actually a bit tight, but was hardly criticised during our meetings,” Stickelberger explains. “It is likely that investors will install larger fields, when scaffolding is needed.”
PV the big competitor for newbuilds
The model rules say that new structures should be built according to the nearly zero energy standard (see page 30, part D of the attached document). Similar to heating retrofits, solar thermal is part of several standard solutions here. Still, Stickelberger does not believe that this part of the regulation will be a big push for solar thermal because it also requires newbuilds to cover part of their electricity demand by generating it on their own. Typically, this is done by using a photovoltaic generator. “Once people install a PV plant anyways, it is very likely that they will go for a combination of PV and heat pump instead of solar thermal,” Stickelberger adds.
Widely harmonised incentive scheme for solar thermal en route
Not only the building codes, but also the incentive schemes for solar thermal are subject to cantonal legislation. But since 2003, cantonal incentives are part of the Harmonised Incentive Model (Harmonisiertes Fördermodell, HFM). In 2015 – probably during the second half of the year – the model is going to be revised. Ideally, it could come into force in 2016, Stickelberger says. Swissolar has made several suggestions for the revised version. The association’s key concern is that the incentive amount for solar thermal systems should be at the same level as the one for PV plants. In addition, Swissolar has suggested that incentives be paid based on collector output as stated on test certificates and not based on collector area, in order to ensure that the products are of high quality.
More information:
Swissolar: http://www.swissolar.ch/
https://solarthermalworld.org/wp-content/uploads/2015/01/model_building_regulation_january_2015_in_french.pdf
https://solarthermalworld.org/wp-content/uploads/2015/01/model_building_regulation_january_2015_in_german.pdf