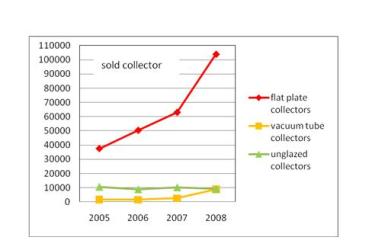 2008 was a very good year for the solar thermal market in Switzerland: The figure shows the annually sold collector area of different technologies. Source: Swissolar market studies Solar Energy 2005 to 2007

Swissolar, the solar energy association of Switzerland, surprises us once more with a very comprehensive market study of the year 2008. From the 275 Swiss solar companies, which participated in the survey, 143 solar thermal companies and 56 photovoltaic companies answered the sent-out questionnaire. The survey’s most important conclusion: 2008 was a very good year for the solar thermal market in Switzerland.

Sales of flat plate collectors within the country amounted to 104,040 m2, an increase of 65 % compared to the previous year. The vacuum tube market developed even faster, albeit starting from a lower level. The sold collector area grew from 2,554 m2 in 2007 to 8,793 m2 in 2008. The sector of unglazed collectors rather stagnated.

Combi systems, which supply energy for hot water and space heating, enjoy a large market share in Switzerland’s residential sector. According to Swisssolar the big jump within the sector of multi family houses and commercial systems for hot water is responsible for the successful market development. Some ups and downs in the following table are caused by imprecisely filled in questionnaires.

The study is available in a German and a French version (see documents attached).