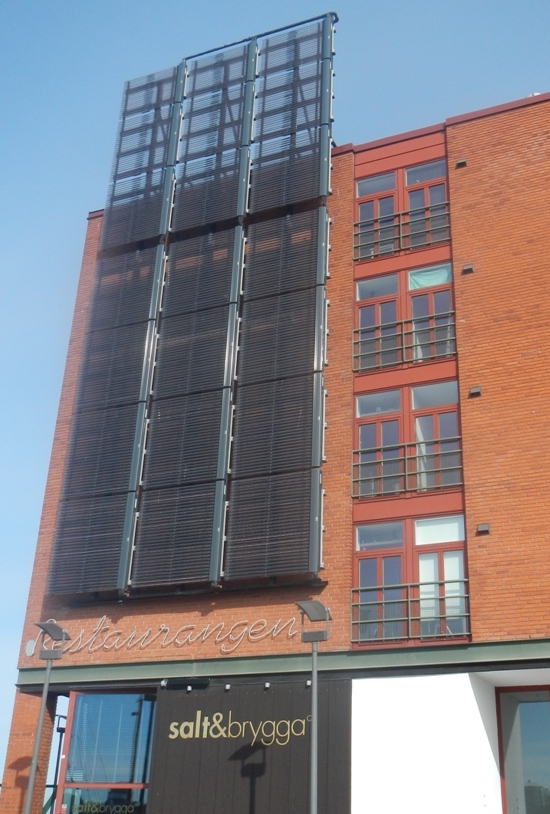 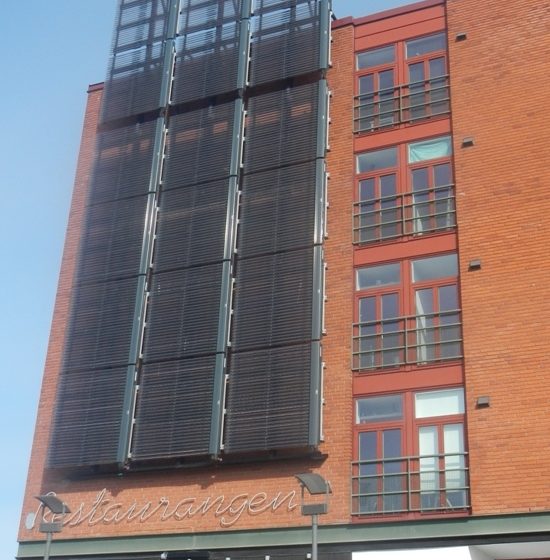 The IEA Solar Heating and Cooling (SHC) programme has recently updated its country report on Sweden’s solar thermal industry, pointing out the increasing competition with other energy technologies and the factors exacerbating the decline in sales. It seems as if not even the rather high national carbon tax can reinvigorate the country’s solar heat market. Especially in the residential segment, fossil fuels have already been phased out and biomass boilers plus district heating have become the standard in cities, while heat pumps dominate in rural areas. The photo shows a solar facade with vacuum tube collectors in the Swedish city of Malmö.
Photo: Riccardo Battisti
Sweden’s solar thermal market has experienced a rapid decline since investment subsidies for collectors were stopped in 2011. The budget was about EUR 1 million annually, while PV started out much higher, at EUR 5 to 10 million per year.
“Solar thermal is in competition with several technologies: first, heat pumps due to low electricity prices; second, wood boilers because of low wood fuel prices; third, waste incineration and industrial heat, cheap sources of energy for large district heating plants,” said Jan-Olof Dalenbäck, Professor from the Chalmers University of Technology, Sweden. “On top of this, photovoltaics attracts much attention from the media and end customers because of favourable incentives, which will rise to about EUR 100 million annually over the next years.”
Swedish consultant Robert Sundquist from ETAB confirmed that these are the three technologies which solar thermal is up against and added that there should be a level playing field for all of them: “Subsidies should not favour one technology over the other. Just look at the large 75 % increase in PV capacity last year.”
Sweden’s solar thermal market in continuous decline
Source: Chalmers University of Technology
The updated IEA SHC report on Sweden shows that the market price of flat plate collectors has dropped in line with the overall development of collector prices across Europe. Vaccuum tube collectors, however, have become more expensive, probably because most of the small companies, which had imported from China, are no longer operating. This has left only a few businesses which make higher-quality products. About half of the market is now being served by local manufacturers, according to the country portrait.
National carbon tax as a market driver?
National targets for 2020 are a 40 % reduction in greenhouse gas emissions, at least a 50 % renewable share in consumption, and a 20 % higher efficiency in the end use of energy. Moreover, fossil fuels for space heating and domestic hot water are to be phased out by 2020. However, there are no specific mandatory targets for renewable heating and cooling.
Despite the above-mentioned lack of direct support for solar thermal, the country portrait lists some current sets of rules which could stabilise deployment. For instance, the Swedish building regulations include solar energy use in energy performance calculations. Furthermore, there are tax deductions for building repairs, conversions and extensions if a solar heating system is installed. They offer a reduction of up to 30 % in installation and connection costs.
A CO2 tax on fossil fuels was implemented throughout Sweden in 1991 and the associated regulations were revised in 1994, when the country entered the EU. The current value is Swedish Krona (SEK) 1,120 per tonne of CO2, which is approximately EUR 117 for every tonne of carbon dioxide. The fuels impacted by the regulation are petrol, diesel oil, natural gas and coal. Waste incineration is also included, provided that 12.6 % of the waste comes from fossil sources, which translates into about EUR 15 per kilogramme of waste. Dalenbäck explained the positive long-term effects of the tax on the Swedish heating sector:
Dalenbäck also thinks that the carbon tax had a slight impact on solar heat in the 1990s, “but not anymore, as today’s main competition is heat pumps and bio-energy.” He cannot imagine any scenario in which the tax could be improved to become an effective tool for boosting solar thermal, “as Sweden no longer uses fossil fuels for heating.”
IEA SHC is an international research and information platform for solar heating and cooling technologies. It is used by over 200 experts from 21 countries and five organisations to conduct collaborative research on a wide range of topics, from green quarters in urban planning to future storage tank designs and the integration of large-scale solar fields into district heating and cooling networks. As part of its services, the IEA SHC programme publishes updated market profiles of all 20 member countries each year. You can find the list of countries online and a link to their profile at the bottom of each country page.
Websites of organisations mentioned in this article:
http://www.chalmers.se/en/Pages/default.aspx
http://www.iea-shc.org
http://www.etab-energy.com