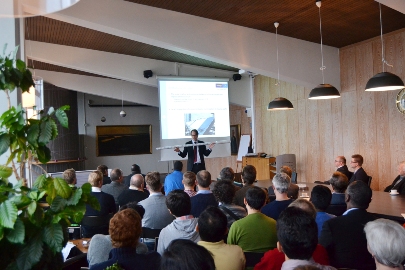 The first large-scale system which incorporates the newly developed CoolStore chiller by Swedish company ClimateWell was commissioned in June 2014 and has since been operating flawlessly at Swedish coffee producer Löfbergs in Karlstad, Sweden. In the middle of October, ClimateWell organised a mini-conference at Löfbergs in order to showcase the installation and its first monitoring results. The measurements taken between 11 and 25 July showed an average electrical coefficient of performance (COPel) of 10.6. This is more than twice as much as for a conventional electric vapour compression system, which has a COPel of between 2 and 5. The highest COP measured at the demonstration plant was 12.
Photos: ClimateWell

The electrical COP is the ratio of cooling provided to electrical energy consumed. “Considering that the primary goal of solar cooling systems is to reduce electricity consumption, it is essential to compare the COPel of different cooling installations,” ClimateWell’s Business Development Director, Karl Bohman, explains. “We did not measure the thermal COP, since our adsorption chiller components are directly integrated into the solar collector,” he adds. “Instead, we measured and calculated the ratio of cooling energy delivered to solar radiation captured – a COPsolar of 0.17.”

View over the 130-collector roof of Löfbergs’ coffee roastery. The condenser/evaporator on the left of the collector is shielded from the sun and insulated on the reactor side in order to minimise potential losses.
The 180 m² collector field which was installed on the roof of Löfbergs’ coffee roastery delivers the energy to air-condition and heat the warehouse building. The collectors are products by Polish company Hewalex and include eight 1.8 m long CoolStore tubes manufactured by ClimateWell. These single-glass vacuum tubes, which are filled with lithium chloride (LiCl) and water, include the triple-stage absorption cooling cycle. The CoolStore tubes have no additional electricity supply: sunlight is their only source of energy. The tubes’ hot side is connected to the hot water system of the building and their cold surface is connected to the building’s air conditioning. Another article from February 2013 already explained how the tubes work.
ClimateWell’s founder and CTO, Göran Bolin, the man who invented ClimateWell’s new solar sorption technology, said at the workshop: “Our first results prove that all the effort and hard work is paying off, and I am extremely proud that my vision has finally become reality.” The average electrical COP of 10.6 was measured during the commissioning phase under non-optimised control strategies. ClimateWell says that because of the ongoing optimisation, the system could achieve an electrical COP of as high as 15 for cooling. The company also emphasised the chiller tubes’ simpler design and lower control requirements because of their integration into the solar collector.
The event was organised in collaboration with the SHC IEA’s Task 53 on solar heating and cooling. Some 80 visitors from major solar markets and leading research organisations attended the workshop. The installation of the demonstration plant was supported by the SunCool project, an initiative co-financed by the EU’s LIFE programme. SunCool started in 2012 and will run until 2015.
More information:
http://www.climatewell.com
http://www.lofbergs.se&nbsp;