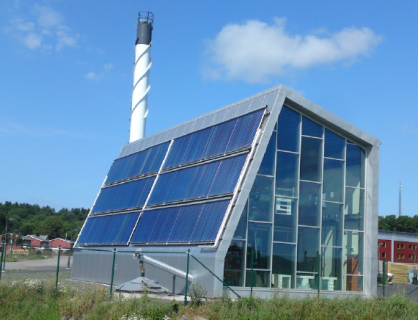 Solar district heating may still be in its infancy, but more and more projects across Europe are starting to showcase its great potential. Speakers at the second International Solar District Heating Conference, which took place in Hamburg, Germany, on 3 and 4 June 2014, presented and analysed several solar district heating designs, as well as their successful implementation. For example, Jan-Olof Dalenbäck, Professor at the Chalmers University of Technology, shared the first performance results of the solar thermal systems at the new solar-heated residential area in Vallda Heberg, Sweden. The photo shows the main heating station with 108 m² vacuum tube collectors in its facade.
Photo: Calmers University of Technology

The project included the installation of 14,000 m² of heated floor area in 26 single-family homes, four multi-family buildings, 6 terraced houses with altogether 22 flats and a nursing home with 64 flats. All buildings have been designed according to the passive house standard. The calculated heat demand amounts to 620,900 kWh/a (space heating, ventilation and hot water), which translates into an average specific heat demand of 44 kWh/m²a.
Solar thermal to cover 40 % of reduced heat demand
60 % of the heat demand is planned to be covered by a 250 kW pellet boiler, whereas the remaining 40 % are expected to be supplied by solar collectors. The solar collectors (108 m² of evacuated tube collectors and 570 m² of flat plate collectors) were installed on the multi-family buildings, the main heating plant and the four substations, with the latter housing a buffer tank and heat circulation systems. “Several previous projects have used flat plate collectors with the same inclination as the roof (24 – 27 ⁰),” Dalenbäck explained. “The aim of this project was to increase the share of solar heat. This has been done by reducing heat demand and increasing the collector area. Therefore, we installed more collectors at an inclination of 70 ⁰ on the main heating plant to produce more heat year round, but less so in summer. In addition, we wanted our project to showcase evacuated tube collectors without glycole.” Dalenbäck confirmed that they had not done any simulations: “The system is based on rules of thumb and experiences. We expect the flat plate collectors to produce 350 to 400 kWh/m2a and the vacuum tube collectors to yield more than 500 kWh/m2a.”
The substations distribute 60 °C hot water to the buildings along direct circuits (see the violet lines for the secondary heat circulation on page 7 of the attached presentation). There are also heat-driven washing mashines and dishwashers, as well as an air heating coil inside the air duct for space heating. According to Dalenbäck, the costs for the solar systems added up to 400 Euro/m² heated area, corresponding to 1 % of the total building costs.
Solar yields as expected
At the SDH conference, Dalenbäck presented the first monitoring results for substations 1 and 2 (with 142 and 48 m² of solar collector area, respectively). The results from substation 3 and 4 will be available next year. The solar systems, which were in operation for some of the time between April 2013 and March 2014, delivered a total of 372 (substation 1), 322 (substation 2) and 384 kWh/m² (main heating plant). “Due to the fact that the district heating system was designed by experienced developers and consultants, the solar systems work as expected,” Dalenbäck said. “Because of the warm winter, the measured total heat demand of the monitored part of Vallda Heberg was below our calculation. The distribution losses were slightly higher than anticipated.”
More information:
http://www.solar-district-heating.eu
http://www.chalmers.se/en/Pages/default.aspx
Vallda Heberg: http://www.eksta.se/pages.aspx?r_id=39985 (in Swedish Language)
https://solarthermalworld.org/wp-content/uploads/2014/07/sdh_2014_jan_olof_dalenback.pdf