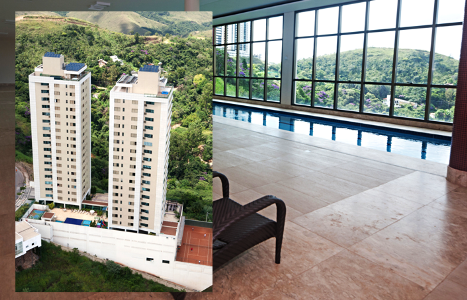 More than 3,500 solar water heating systems have been in operation at blocks of flats across Brazil’s ‘solar city’ Belo Horizonte. This figure, an estimate by organisations which were previously part of a business cluster called BH Solar, affirms the city’s exceptional status in Brazil and around the world. Most of the solar systems have been installed on the roofs of high-rise buildings intended for the middle class and the wealthy. The photo shows two such structures. One flat has 4 bedrooms and extends over an entire floor, measuring 280 m². To provide the security that owners were looking for, recreational facilities, such as a swimming pool and a tennis court, have been set up inside the walls put up around the complex.
Photos: Construtora Altti
One local construction company with much experience of solar water heaters is Construtora Altti. According to CEO Alberto Viotti, the company had started using solar equipment for a block of flats as early as in 1998. The business supplying this first installation had been Enalter, a collector and tank manufacturer from the greater region of Belo Horizonte.
Initially, the innovative technology had been intended as a unique selling point for the luxury housing market. Viotti pointed out that electric shower heads commonly available at that time would have not provided the high level of comfort needed for luxury flats. A central water heating system could have offered the comfort desired by investors, but it would have used electricity, a particularly expensive energy source in the region, and led to high running costs. Solar thermal had been a good alternative for providing the necessary level of comfort at moderate prices.
Viotti said that another important success factor had been the existence of well-established local solar technology suppliers, which had been operating on the market since the early 1980s. They ensured the availability of high-quality products and maintenance services. According to Construtora Altti, a typical 100 m² collector field, like the one set up on each of the high-rise buildings in the photo above, costs around Brazilian Real (BRL) 115,000 or USD 35,500 today, including gas backup and installation. The payback period is said to be around 3 years. The specific costs are at 1,150 BRL/m² of installed collector area, a figure that includes storage tanks holding up to 7,000 litres (355 USD/m²).
The system, nearly 6 m² collector area per flat, meets up to 70 % of hot water demand throughout the year and the remainder is supplied by a gas heater. A gas boiler is used as a backup to the solar unit when it is raining.
Wherever possible, the blocks of flats built by Altti include a swimming pool in the common area. These pools used to have heat sources not connected to the solar thermal installations. Since this year, integrated solar thermal systems have been supplying heat to showers and pools instead, in order to make better use of space and create synergy between supply and demand.
More could be possible if the heating installation were integrated with the cooling one. However, space cooling is usually the responsibility of the flat’s owner, and the typical system being installed in these flats is a decentralised split air conditioning unit.
Regarding photovoltaic energy, Construtora Altti will start its first project this year in a building in Uberlândia, a city located 550 kilometres away from Belo Horizonte. As part of the business’s marketing strategy, a PV generator will be installed in the common area of the blocks.
This article was written by Leticia Sother, a freelance journalist based in Belo Horizonte. She has recently completed her bachelor’s degree in architecture.
Organisations mentioned in this article:
http://www.enalter.com.br
http://www.altti.com.br