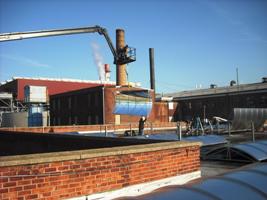 The 38 Abengoa parabolic trough collectors on the roof of the piano maker Steinway & Sons in Island City, New York, will produce steam at 200 °C from spring on.
Photo: Steinway

A special kind of solar thermal demonstration system is currently being installed on the roof of Steinway & Sons Co. in Long Island City, New York. The piano maker has high demands for consistent humidity and temperature in their factory halls. Steinway also continuously requires low pressure steam for production. This is a perfect constellation for use of solar energy, thought facility manager Bill Rigos, a Greek national, who grew up with solar energy in his home country. He chose the solution of Spanish company Abengoa Solar. 38 Abengoa parabolic trough collectors are currently being installed gradually on the roof of the Steinway factory building. “We need a temperature of 200 °C to run a double-effect direct gas fired adsorption chiller for dehumidification in the summer time,” explains Rigos. “In the winter the steam is used to produce low pressure steam for heating and production purposes via a heat exchanger.” The adsorption chiller was supplied by the Chinese company Board Air Conditioning.
With this installation, Rigos broke new ground in utilising solar thermal energy, and received a demonstration cost subsidy of US$ 300,000 from the New York State Energy Research and Development Authority (NYSERDA) – 30 % of the total investment of € 988,000. The company can save a further € 266,000 via federal tax credits, which leaves a financing requirement of € 422,000. “The payback time for this investment will be 4.5 years,” calculates Rigos. The facility manager predicts that the system will be commissioned in spring. Rigos used the services of two engineering firms as planners: Schuyler Engineering from New York and Energy Resource Solutions (ERS) from Haverhill, Massachusetts.