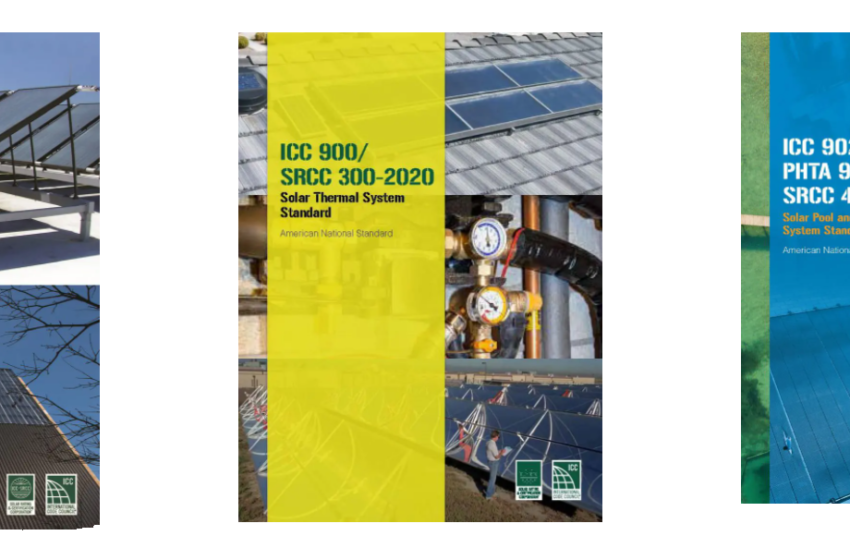 In early December 2020, three revised Solar Rating & Certification Corporation standards cleared an important hurdle, receiving the Solar Thermal Standard Consensus Committee’s stamp of approval. Following final submission to US ANSI, they were made available on the SRCC website for view and purchase. The standards cover performance rating and test requirements for collectors (SRCC 100), solar thermal systems (SRCC 300) and solar pool heating (SRCC 400).
“Revising the standards has taken us a big step forward,” noted Shawn Martin, SRCC Vice President of Technical Services. “We’ve aligned our rules with those of ISO 9806, making some substantive changes to better address new technologies such as PV-Thermal.”
Usually, standards are amended every five years. In April 2019, the International Code Council set up a Solar Thermal Standard Consensus Committee (IS-STSC), which then held several online meetings to discuss the rule changes proposed by the participants. The committee was made up of 12 members, with four each representing the industry, end users and the general public.
“The committee has done a great job of not closing the door on innovation, though we’ve closed some loopholes in the technology descriptions,” said Adam Chrisman, President of Californian solar collector manufacturer Sunearth, an IS-STSC industrial member. As an example, the revised standards include a more in-depth explanation of labelling needs. Until now, solar thermal suppliers have relied on labels affixed to each component, be it a collector or a tank. However, a growing number of manufacturers are offering complete solutions these days. As a result, the SRCC added Chapter 4, “Labelling, Marking and Documentation,” to system standard SRCC 300 to specify what sort of information must be printed on one or two labels in which size and format.
Close cooperation between Solar Keymark and SRCC
The committee’s industrial members also successfully argued for the removal of the full-load backup requirement. “A backup providing 100 % of the load without solar energy is limiting clients’ choices,” said Chrisman. “Thanks to the new regulation, we can now supply our clients with systems that have a high solar fraction so they need only small backup units.” The new regulation also allows SRCC to certify solar-only systems for the first time. According to Martin the first such certification was already issued for a solar water heater providing performance results with and without backup.
As European label organisation Solar Keymark wants to collaborate more closely with the SRCC, the revised standards’ alignment with the current edition of ISO 9806, published in 2017, could be the first sign of a burgeoning partnership. “We’ve aligned SRCC with Solar Keymark testing procedures, except the fire test for PV-Thermal elements, which is part of SRCC standards but not yet required by ISO 9806,” explained Solar Keymark Network Chairman Andreas Bohren, who has been also an IS-STSC member.
The fire test is crucial to labelling PV-Thermal components and systems, Martin confirmed. The new SRCC 100 stipulates that fire tests must be conducted on a fully assembled PV-T system equipped with all parts necessary to produce electricity and heat.
In February, Martin plans to hold online meetings each with representatives for SRCC-accredited labs and manufacturers to inform both stakeholder groups about the impact of the revisions.
Those interested in participating at the webinars can contact Shawn Martin for more information:
smartin@solar-rating.org
Organisations mentioned in this article:
Solar Rating & Certification Corporation: https://solar-rating.org/
Solar Thermal Standard Consensus Committee:
https://www.iccsafe.org/products-and-services/standards-development/icc-srcc-solar-thermal-standards/
Solar Keymark: http://www.estif.org/solarkeymarknew/
Sunearth: https://sunearthinc.com/