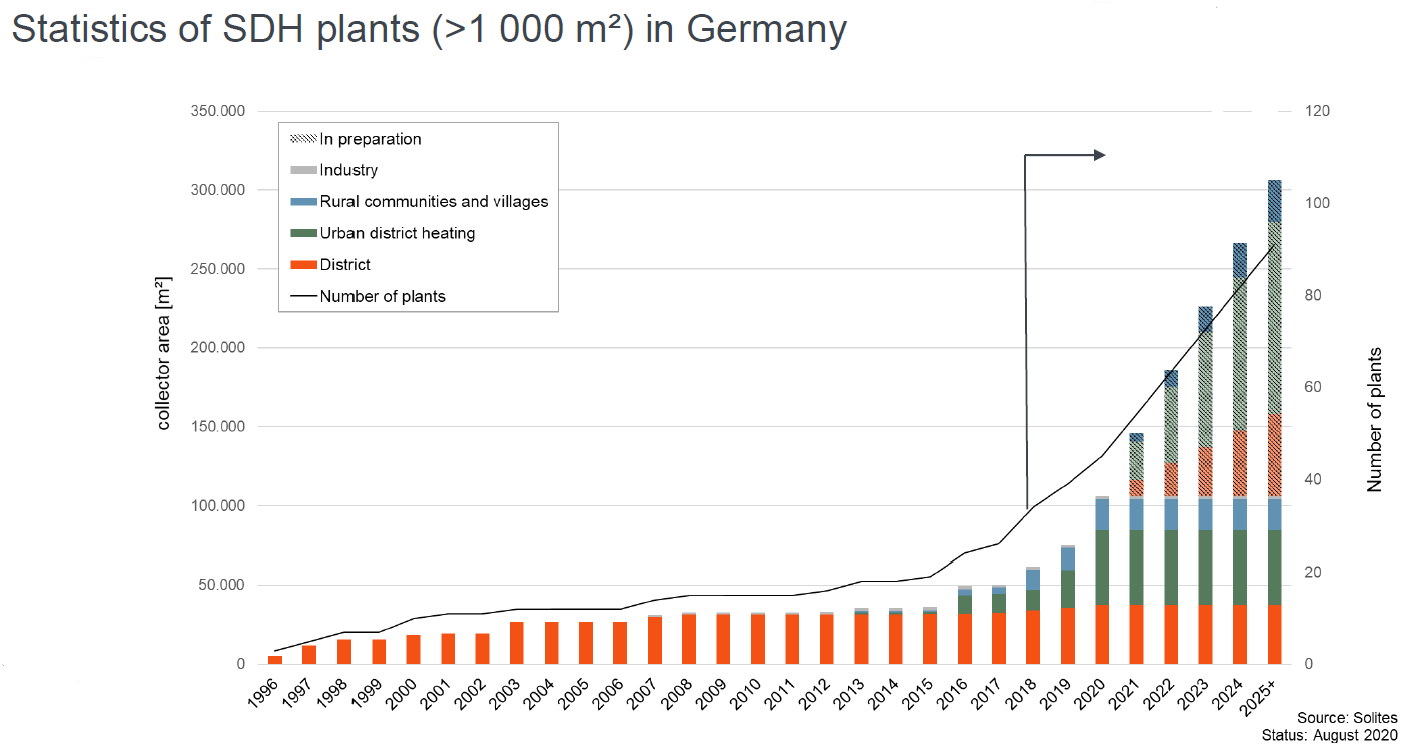 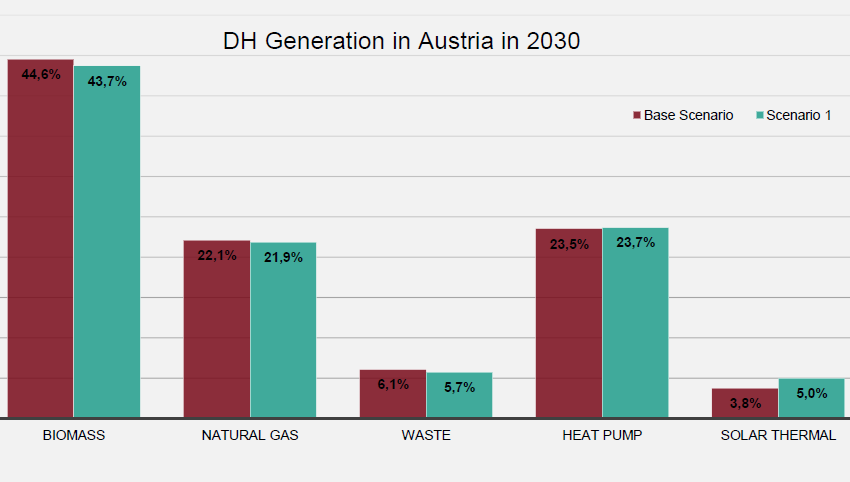 Solar thermal will have a key role to play in growing western Europe’s solar district heating markets over the next decades. During last year’s mid-October workshop organised by IEA SHC research platform Task 55 – Towards the Integration of Large Solar Systems into District Heating and Cooling Networks, Dutch, German and Austrian SDH experts updated attendees on the current situation and the potential in their respective markets. For example, the collector area installed in Germany, they said, could triple from about 100,000 m2 used in 41 systems today to more than 300,000 m2 by 2025 (see the chart above). As announced in December 2020, the country’s soon-to-be biggest SDH plant will have 13 MWth, a good deal more than the 10 MWth installation in Ludwigsburg (10 MWth). This new plant will be put up in Greifswald, in northeast Germany, and is scheduled for completion by 2022.
Source: Solites
At the mid-October event, Luuk Beurskens, of TNO, a Netherlands Organisation for applied scientific research, presented the initiative for a Solar Thermal Roadmap (“Aanzet tot Routekaart Zonnewarmte”). The authors of the 32-page report (see the attached PDF) looked at what experts had to say about the solar thermal market in the Netherlands, and what actions need to be taken for a strong growth in the years ahead. The Dutch building sector alone could potentially see its solar capacity grow from 1.2 PJ in 2019 to 35 PJ in 2050. And adding seasonal heat storage could raise the country’s solar potential to as much as 54 PJ, which would be enough to meet 26 % of the total demand for thermal energy by 2050. The assessment shows important potential contributions to be provided by individual residential systems (34.3 PJ) and new solar district heating networks (18.8. PJ).
Plans to transform the energy market have gained steam after the Dutch cabinet decided to phase out natural gas at the end of 2018 because of a rising number of earthquakes and the damage caused by the Groningen gas field in the north. The TNO initiative assumes the following heat mix in the residential sector to estimate the potential role of solar thermal energy:
A major element of the report comes in the form of a matrix that describes the role of solar heat in transitioning the built environment away from natural gas, with suggested ambitions for 2020, 2025, 2030 and 2050 (p. 26). The authors emphasise that this matrix needs to be developed further in consultation with stakeholders before it can be turned into a solar thermal roadmap.

District heating mix in Austria by 2030 according to forecasts created using software tool Balmorel. Scenario 1 predicts that investments in solar heat will be 10 % lower than in the baseline scenario (410 EUR/kWth compared to 460 EUR/kWth).
Source: AIT
Hamid Aghaie, of the Austrian Institute of Technology (AIT), spoke about a possible evolution of Austria’s DH sector and the role of solar thermal over the next decade. Currently, 60 % of the country’s district heat is generated by CHP plants, though heat pumps and solar thermal are expected to increase their share in the market.
Using open-source dispatch and investment model Balmorel, AIT estimated what proportion of Austria’s DH capacity solar thermal systems could provide by 2030. The results show that the share of solar heat in DH networks could increase by a factor of 60, from essentially zero in 2018 to 3.8 %, in 10 years. At the same time, demand for district heat would grow from 23 TWh to 28 TWh.
In addition, sensitivity analyses have shown that the factors crucial to boosting the solar heat market in the future will be upfront costs and fossil fuel prices. A 20 % increase in the price for biomass and natural gas could grow the share of solar thermal in DH capacity to as much as 4.6 % in 2030.
Organisations mentioned in this article:
https://www.iea-shc.org/
https://task55.iea-shc.org/
https://www.tno.nl/en/
https://www.ait.ac.at/en/
https://solarthermalworld.org/wp-content/uploads/2021/01/tno-heat_roadmap_netherlands_2020.pdf