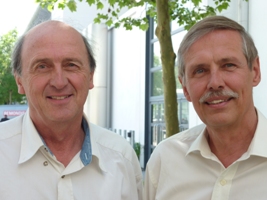 After 50 successful years in the Spanish solar market, solar pioneer Rayosol was brought to its knees by the collapse of the Spanish construction industry. Owner Mark Wikholm (right) and Commercial Director Louis D. Bellocq had to file for bankruptcy last autumn.
Photo: S. Banse

For half a century, Rayosol has made its mark on the Spanish solar thermal industry. The company based in Malaga has more than 25,000 solar installations on its list of references, including a large portion of the hotel complexes along the Costa del Sol and public buildings in Andalusia.

Rayosol was founded in 1960 by the US-American engineer Howard Byrd and the Dutch economist Peter Bongers. Byrd brought with him the know-how he gained working in the United States and Israel, where the use of solar thermal systems dates back to the 30s and 50s, respectively. In 1964, Byrd filed a patent on his first solar collector produced in Spain.

The Spanish solar industry experienced its first boom time during the mid-1970s. The first oil crisis made operators of big hotels realize how much of their profit margin depended on stable and reasonable energy prices. Many of them decided to install an “oil crisis-proof” solar thermal system. At that time, Bongers’ nephew from Canada, Mark Wikholm, already chaired the company. In the late 70s, Frenchman Louis D. Bellocq joined Rayosol as the head of the commercial department. Wikholm and Bellocq turned Rayosol into a flourishing company with 50 employees and an annual turnover of about EUR 4.5 million in 2008.

Besides its solar thermal business, which made up two-thirds of the entire business activities and included not only the production of collectors and tanks, but also the sale and installation of complete systems, the company’s portfolio furthermore included PV systems and HVAC installations.

The latest boost for the solar thermal industry came in 2006 when the government introduced a national solar obligation for new buildings in Spain. The greater demand prompted Rayosol to buy additional machinery in 2007 and develop new products for the PV sector. Nine months later, the economic crisis hit the country and brought the Spanish construction industry to a standstill.

“There are solar obligations for new buildings, but there are hardly any building activities at the moment,” Mark Wikholm said about the impact of the financial crisis. “The Spanish construction industry is currently at its 1964 levels. Because of our investments before the crisis, we had to pay off large loans. On the other side, we had to report declining sales.”

According to Bellocq, the fact that many customers ran into financial difficulties only exacerbated the liquidity squeeze. Last year, Rayosol was unable to collect around EUR 1 million in outstanding bills. “Moreover, it is extremely difficult and expensive to reduce staff in Spain in times of crisis,“ Bellocq stated.

Wikholm and Bellocq then tried to find a purchaser for Rayosol. Two well-financed parties interested in the company were found with the help of the union, but the acquisition failed in both cases due to the unwillingness of the Andalusian government to grant a loan on part of the purchase price. In September 2009, Wikholm and Bellocq had to finally file for bankruptcy.

“During the last 30 years, the Spanish government has not taken care of his mechanical engineering industry, but put all energy in the tourism,” complains Wikholm. “The government was not interested in saving our company and its recently 40 jobs.” Instead, the oldest solar thermal manufacturer in Spain is now closing its doors forever.