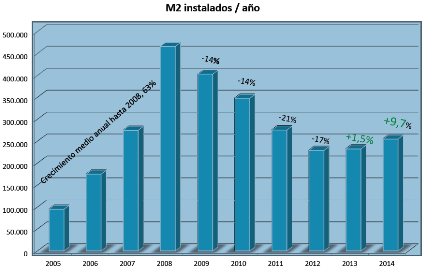 After an uninterrupted four-year slump (and a stagnating market in 2013), the latest figures from the Spanish solar thermal association, ASIT, show that the market is alive again: A total collector area of 255,000 m² (179 MWth) was installed in 2014 – helping it grow by around 10 %. The market owed much of its increase to the Andalusian incentive programme, which has recently been extended to June 2015. Still, ASIT’s market survey published in February reported a decreasing manufacturing and export segment. The association confirmed that the participants of the survey covered 92 % of the market; only 8 % had to be estimated (you can find a list of the participating companies in the attached PDF). The Spanish solar thermal industry generated a turnover of EUR 204 million in 2014 and had around 5,100 direct full-time employees.
Source: ASIT
“We cannot confirm actual recovery, but at least we are hopeful that we have hit rock bottom, and we expect that the current rebound will lead us to a real path towards growth,” Pascual Polo, General Secretary of ASIT, explains.

According to the association, the Technical Building Code, CTE, generated 66 % of the new market volume in 2014, and a third of the newly installed collector area was subsidised through regional incentive schemes. With 85,000 m² of collector area installed in 2014, the programme in Andalusia was the most successful regional scheme – accounting for 33 % of the entire Spanish market in a region with barely 20 % of the country`s population. Both demand-side schemes went up: CTE grew by 5 % and the regional schemes by 22 %, respectively. The following table shows the strong increase in regionally subsidised collector area since 2012.

Figures selected from the annual market statistics of ASIT. The authors of the study estimated the collector area of solar process heat to have been at around 2,000 m² in 2014 – less than 1 % of the market, which is why they were not included in the table.
ASIT´s survey also differentiated based on collector technology: The segment of flat collectors incorporated into individually designed systems made up 101,909 m² (21 % less than in 2013), whereas prefabricated system kits based on flat plate collectors accounted for 133,446 m² (42 % more than in 2013). Vacuum tube collectors still showed a rather small share of 6 % (15,894 m²), but which more than doubled compared to 2013.
Selected figures from the annual market statistics of ASIT
Installations across Spain accounted for 56 % of the manufactured collector area last year, whereas 44 % of it was exported. Both figures were lower than in the previous year (see the table above). The number of collectors made in Spain was stagnating and did not follow the upward trend of the market in 2014, which means that imports are on the rise in Spain. ASIT also stated that the Spanish industry produced largely below total manufacturing capacity, which was estimated at 1.3 million m² of collector area per year.
More information:
http://www.asit-solar.com
https://solarthermalworld.org/wp-content/uploads/2015/03/asit_solar_thermal_market_statistics_2014.pdf