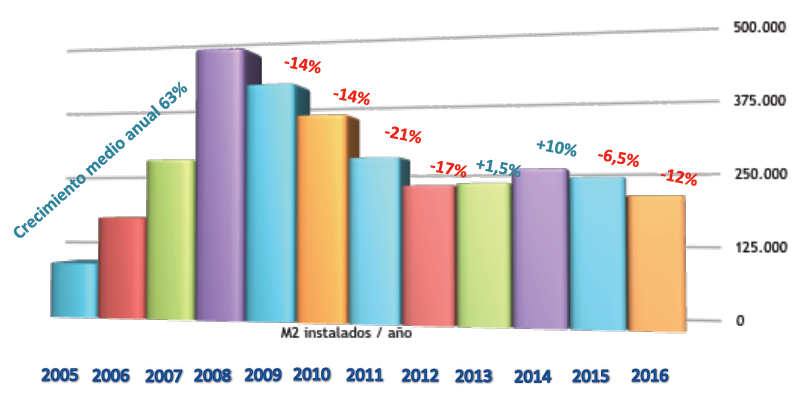 Spain’s solar thermal market experienced a year-on-year drop of 12 % in 2016 and ended up at 212,190 m2 (149 MWth) of newly installed collector area. As in 2015, the main reasons for the contraction were the lack of finished newbuilds and the end of regional incentives, such as the ones in the Spanish region of Andalusia. However, the construction industry is slowly starting to recover and new government incentives may boost the market this year. Additionally, local manufacturers have expanded their export business. All in all, the country’s solar thermal industry generated a turnover of EUR 170 million in 2016 and employed 4,250 people. These and other results can be found in the annual report published by the Spanish solar thermal association ASIT last week (see the attached PDF).
Chart: ASIT
The causes of the setback are not new: a poorly performing construction sector, the discontinuation of some regional incentive programmes, such as Prosol in Andalusia, and a lack of any new incentive schemes. Pascual Polo, General Secretary of ASIT, said: “The sector is still dependent on very few incentive schemes and the still weak housing construction segment. I think that the slump of the Andalusian market due to a lack of incentives since mid-2015 has been the main reason for last year’s troubles.” Another factor was the rise in heat pump sales. Spain’s technical building code CTE, which was approved in 2006, deems them acceptable as an alternative renewable energy source for generating hot water in newbuilds.
Slightly optimistic outlook
The forecast for 2017 seems more promising. Polo said that the new Programa de Incentivos para el Desarrollo Energético Sostenible (Incentive Programme for Sustainable Energy Development) would take effect in Andalusia in April 2017. It hadn’t been finalised yet, but he added that the scheme would offer important non-repayable grants covering up to 40 % of the solar thermal installation costs incurred by homeowners, SMEs and local government agencies. The programme has a planned budget of around EUR 227 million until 2020 and will be supported by European Regional Development Funds. The application period is thought to start in the second half of 2017. Since January 2017, companies interested in participating in this scheme have been able to register as suppliers and service providers.
The construction market is expected to grow this year too. Until last October, developers had started 53,131 new projects for an estimated 63,000 new homes by the end of the year, an increase of 27 % compared to 2015 (49,695). This trend is expected to continue and improve the situation on the domestic solar thermal market further. The industry is largely dependent on the CTE, which requires solar thermal installations in newbuilds and during major renovation. ASIT put the share of CTE-based installations in newly installed collector area at 71 % in 2016 (see the table below).
Polo said that there had been a steady increase in new residential construction since 2013. “Most of these developments, which were started three to four years ago, will be commissioned in 2017. We are pretty confident that the solar market will experience some growth this year.” Another positive sign was the rise in non-subsidised systems to as much as 20 % of total market volume last year, up from 15 % in 2015.

Industry expands export and manufacturing activities
ASIT’s report shows that in 2016, the collector area manufactured in Spain added up to around 149,500 m2, of which 63,500 m2 or 40 % were installed and sold domestically and 83,000 m2 exported. But the manufacturing potential of Spanish factories is estimated at 1,300,000 m2 per year and a mere 12 % of it has so far been utilised. Only three companies – Baxi Roca, Delpaso Solar and Termicol – exported most of their production last year.
The Spanish Renewable Energy Plan, PER 2011-2020, aims at 10 million m2 of solar thermal area by 2020. The authors of the ASIT report believe that current development will lead to fewer than 5 million m2 or half of the target by then.
Websites of organisations mentioned in this article:
ASIT: http://www.asit-solar.com
Agencia Andaluza de la Energía: https://www.agenciaandaluzadelaenergia.es/soporteinteractivoOrden/
New Andalusian incentive programme:
https://www.agenciaandaluzadelaenergia.es/noticias/la-junta-destina-227-millones-a-incentivos-al-desarrollo-energetico-sostenible-enero2017
https://www.agenciaandaluzadelaenergia.es/ciudadania/subvenciones
https://solarthermalworld.org/wp-content/uploads/2017/03/spain_market_report_2016.pdf