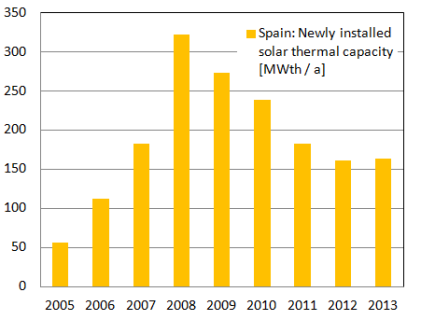 Last year, the Spanish solar thermal market showed signs of recovery for the first time since 2009. According to the latest report by the Spanish solar thermal industry association, ASIT, newly installed capacity grew by 1.5 % in 2013 compared to the previous year (see the attached document). This growth was mainly the result of a seemingly recovering construction sector and of incentives granted by regional governments, such as Andalusia. Recent changes to the most important renewable energy law, however, may threaten the consolidation of these first green successes.
Source: ASIT
Even the darkest hour comes to an end – at least, in the case of the Spanish solar thermal market. Newly installed capacity had declined by more than 50 % between 2008, when the installation business showed a record 322 MWth, and 2012, when less than 160 MWth were installed. Fortunately, the downward trend came to a halt in 2013, when around 163 MWth were installed across the country.
ASIT to wait for the end of 2014 to confirm market recovery
The ASIT report states that most of the new capacity was installed because of the Andalusian government incentive programme. Actually, 70,000 m2 or 30 % of the total 232,500 m2 were installed in Andalusia. The rest of the market was supported by the country’s national incentive programme, the Technical Building Code (CTE), which stipulates solar thermal systems in new housing and public buildings.
According to Pascual Polo, General Secretary of ASIT, “this might be the first sign of a further recovery of the solar thermal installation segment.” In any case, Polo said that it had yet to be seen whether the early improvement would turn into a long-lasting one. “Last year saw a revision of the CTE. It is now no longer compulsory to install solar thermal systems if there is a viable alternative, such as biomass. We hope that this change will not have a substantial effect on the market. But we have to be cautious and wait until the end of 2014 to confirm the recovery,” Polo concluded.
Spanish collector factories far below capacity

With regard to the manufacturing market, ASIT has reported some positive signs, too. Last year, Spanish solar thermal collector manufacturers produced around 241,000 m2 of collectors, of which 140,000 were locally installed in Spain. This represents an increase by 33 % compared to 2012, when only 46 % of the locally produced collector area was installed in Spain (see the table below). The countries from which Spain imported the most solar thermal collectors were Germany (16 %), Israel and Turkey (14 %), Italy and Greece (5 %), as well as Austria (4 %). The export share of Spanish manufacturers also grew by 12 % compared to 2012.

Figures from ASIT ‘s industry survey
Source: ASIT
However, the data shown above remains in stark contrast to the idle manufacturing capacity of the Spanish industry: Despite a total of 1.3 million m2 of production capacity in Spain, local companies produced a mere 241,000 m2 last year (19 % of total capacity).
More information:
http://www.asit-solar.com
https://solarthermalworld.org/wp-content/uploads/2014/07/spain_asit_market_statistics.pdf