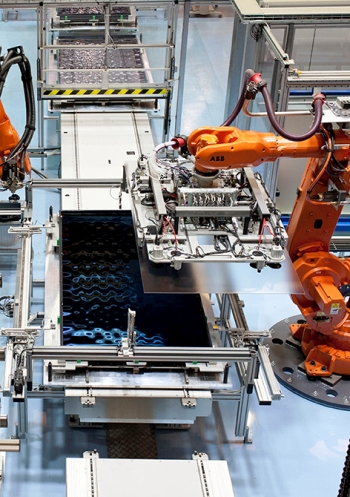 The one presenting Dutch-based BDR Thermea’s solar heating solutions at the Solar Show Africa 2017 in late March in South Africa was Fabrisolia, the new solar thermal centre of excellence created by the company group. It consists of a factory for collector panel assembly and a solar thermal R&D centre and is located in Castellbisbal near Barcelona. BDR Thermea employs around 6,500 people and operates on more than 70 national markets around the globe. The group pursues a multi-brand approach, with several brands for solar thermal systems: Baxi, Baymak, Brötje, De Dietrich, Oertli and Remeha.
Photo: BDR Thermea
Fabrisolia is not a BDR Thermea brand, but the name of a collector producer additionally tasked with training, coordinating R&D activities and providing engineering services for complex solar-based HVAC solutions. The idea of this solar excellence centre for the entire group had been floating around as far back as two years ago. The woman behind Fabrisolia is Gabriele Mackevic, Solar Business Development Manager of the BDR Thermea Group. Mackevic used to work as an independent consultant in the HVAC (heating, ventilation and air conditioning) industry and became convinced that solar thermal had great potential. She welcomed the opportunity to work as the group’s solar business development manager in Spain.

According to Fabrisolia, interest in solar heat solutions was “fairly high” at the fair in South Africa, although the exhibition focused on the power sector. Fabrisolia’s aim was to get in touch with businesses interested in making solar thermal solutions part of their commercial and/or industrial projects. The BDR Thermea division offers these solutions in combination with heat pumps and gas boilers. A new product from the group’s semi-automated collector assembly line had just been introduced at the ISH 2017 in March. The thin collector (46 mm) has been weight-optimised to 25 kg, so that only one person is required when installing it.
About 80 % of the collectors sold under BDR Thermea brand names is manufactured by Fabrisolia. Its factory, which is based near Barcelona and made 90,000 m² in 2015, has a maximum production capacity of 150,000 m².
Websites of organisations mentioned in this article:
Fabrisolia: http://fabrisolia.com/en/
BDR Thermea: http://bdrthermea.com/home/
Solar Show Africa: http://www.terrapinn.com/exhibition/solar-show-africa/index.stm