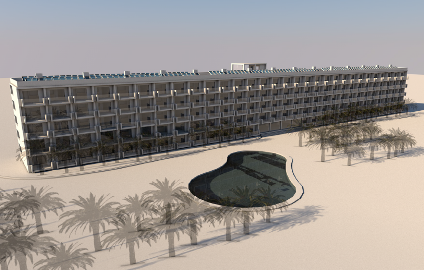 The regional government of the Canary Islands has published a guide on increasing the use of solar thermal in the local hotel sector. The government presented and distributed the study TRNSHOTEL, an analysis and proposals to optimise the solar thermal energy consumption in the Canary Islands hotel sector, during public seminars on 26 and 27 November 2014. The study can be a useful means of developing solar water heating technology in a region boasting a huge tourism sector but great untapped solar potential. The figure shows the 146-room hotel which was used as a reference throughout the study and was simulated in TRYNSYS by the Instituto Tecnológico de Canarias (ITC) to analyse building orientation and list the different solar energy yields and cooling loads (see the attached TRNSHOTEL PDF).
Figure: ITC
By representing more than 70 % of the archipelago’s gross domestic product, the tourism sector remains the main source of income for the Canary Islands. The region with a population of 2.1 million and almost as much surface area as Cyprus has more than 1,000 hotels, Pilar Navarro, Head of the Renewable Energy Department at the ITC and author of the study, confirms. Only last year, the Canary Islands attracted more than 11.4 million visitors – five times the size of their local population.
Despite showing great renewable energy potential and some of the best solar irradiance in Europe (over 2,000 kWh/m²), the islands’ adoption of solar thermal technology has so far been less than stellar: Of the 2.6 million m² installed in Spain by 2012, according to figures from the European Solar Thermal Industry Federation (ESTIF), 100,000 m² – or only 4 % – were installed in its sunniest region, the annual book on energy of the Canary Islands says (see the attached annual year book). Solar thermal accounted for barely 0.2 % of the gross primary energy consumption on the archipelago in 2012.
Energy demand and cost simulation
The study was carried out by the ITC and was funded by the Canary Islands government. According to Navarro Rivero, “the approach of the study was to analyse a project in which some criteria, such as heating, cooling and hot water demand, as well as investment and energy generation costs, have been assessed by using simulation software tool TRNSYS.”
Solar thermal generation costs consist of the investment costs for the system, as well as the annual maintenance costs during the system’s lifetime of 20 years. The costs of gas and propane were estimated based on current fuel prices but excluding initial investment and maintenance.
Source: ITC
In his presentation, Navarro Rivero compared the energy generation costs of solar thermal and fossil fuels and summed up the result as follows: With 0.056 EUR/kWh, the average solar kWh is only half the price of a propane-based one and also cheaper than if being produced by gas water heaters. According to the study, the payback period for solar thermal technologies in the hotel sector is, on average, 5 years. The study also evaluated and recommended the best ways to integrate solar thermal technologies into hotel buildings by taking into account the local regulatory framework.
Incentive programme with short submission period
In late January, the government of the Canary Islands announced a new incentive scheme for renewable energies and energy efficiency. Co-financed by European Union Structural Funds, EUR 2.4 million were allocated to a number of technologies, including biomass, wind, solar thermal and PV. The budget for solar thermal technology was limited to EUR 950,000. Each applicant can ask for a 40 % cost coverage of equipment, installation or engineering services, up to a maximum of EUR 200,000. The scheme is available for both companies and private end users, but the submission period is short and will already end on 5 March 2015.
More information:
Public seminars from 26 and 27 November 2014: http://jornadaeehoteles.itccanarias.org
ITC: http://www.itccanarias.org
Subsidy: http://www.gobiernodecanarias.org/boc/2015/022/011.html
https://solarthermalworld.org/wp-content/uploads/2015/02/trnshotel_simulation_results_pilar_navarro.pdf
https://solarthermalworld.org/wp-content/uploads/2015/02/annual_year_book_of_the_canarian_islands_2012.pdf