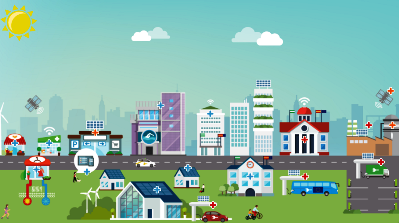 The Andalusian government has finally approved and enacted the Sustainable Construction programme to promote energy efficiency and solar thermal. So far, there have been EUR 164 million available for 38 renewable energy and energy efficiency measures, such as building insulation, lighting improvements, solar heat, photovoltaics and A/C retrofits (see red crosses in image on left). Applications have been accepted since 15 May 2017. Solar thermal systems are eligible for incentives of between 30 and 85 % of investment costs, depending on the application. The scheme, however, excludes compact, prebuilt residential solar water heaters mostly thermosiphon systems. They will only be subsidised when installed as part of social housing projects.
Figure: https://www.agenciaandaluzadelaenergia.es
The southern-most region of Spain, Andalusia, was the country’s primary solar thermal hub over the last years. Of the 3.5 million m² installed in the country by the end of 2015, 1.1 million m² were set up in the far-south region. Since mid-2015, however, the region’s incentive programme Prosol, which had been driving growth, was halted and the market in Andalusia has since declined to a significant extent. Spain’s solar thermal association ASIT said in their latest report that a lack of incentives in Andalusia had been the main reason for the 12 % drop in installations in Spain in 2016. It added that the missing incentives had led to around 50,000 fewer square metres that year.
Still, Spain’s economy seems to be improving overall and Andalusia’s regional government has decided to re-introduce energy efficiency measures. On 15 May, it launched a renewable energy incentive programme called Programa de Incentivos para el Desarrollo Energético Sostenible 2017-2020. The new scheme has EUR 164 million available for reducing energy consumption and improve energy efficiency in buildings. The highest solar thermal incentive is paid for social housing projects (85 % of investment costs) and municipal buildings (80 %). Residential buildings and other kinds of public structures are eligible for 30 % of the investment in an SWH system. So far, more than 1,700 equipment suppliers across all technologies have registered with the scheme to have their products considered for funding (find more details about the programme in the database of incentive programmes).
No compact, prebuilt solar water heaters
ASIT’s General Secretary Pascual Polo expects the programme to have some impact, but he seemed not very optimistic about it. “The incentive isn’t paid for residential, prebuilt SWH systems. Considering that these systems had been the ones most often receiving subsidies from the previous Prosol programme, we don’t expect huge demand for solar thermal with the new one.” Polo emphasised that the previous Prosol scheme had been specifically designed for solar thermal and had included small residential systems, whereas the new one had been mainly dedicated to large systems and public institutions. “Prosol had helped to install up to 80,000 m² per year, while the Construcción Sostenible budget is split between 38 technologies for improving efficiency. Obviously, its results in terms of solar thermal will be less significant for the market than in the previous year,” Polo said.
Regardless of the change in programme structure, Polo said that the sector would receive a slight boost across Andalusia: “The construction segment is gaining momentum. Many newbuilds are about to be completed and the CTE building regulations will increase the number of solar heaters installed this year.” The number of non-subsidised systems has been on the rise as well. Their share in the total newly installed capacity grew from 15 % in 2015 to 20 % last year.
Thanks to the new programme, the Andalusian government expects a total of 50,800 energy efficiency actions (from all technologies) to be taken over the next four years. Applications will be accepted until funds are exhausted.
Websites of organisations mentioned in this news article:
http://www.asit-solar.com
More information on Andalusia’s incentive scheme:
https://www.agenciaandaluzadelaenergia.es/es/financiacion/incentivos-2017-2020/programa-desarrollo-energetico-sostenible/construccion-sostenible