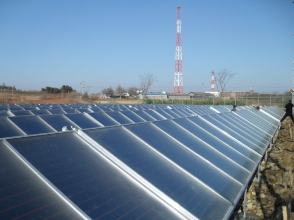 South Korean company Jehin Co. Ltd finished the first demonstration project which uses its newly developed extra large flat plate collectors of 10 m2 each, called “Mega Collectors”. The company’s costumer is Mirae Hospital located in Kimje, Junbuk, South Korea, with 709 beds and a daily hot water consumption of 80,000 litres. Jehin delivered 104 collectors with a total surface area of around 1,040 m2. The company mounted them on the ground in the near surroundings of the hospital and took the system into operation on 10 March. Air source heat pumps are used as the system’s backup heat source.
Photo: Jehin

The “Mega Collector” was developed during a 3-year research cooperation between Jehin and the Korea Institute of Energy Research (KIER). A total of EUR 1.3million has been invested into the project. 70% of the funds were provided by the Ministry of Knowledge Economy (MKE) from the government’s Renewable Energy R&D fund, the remainder by Jehin.

The extra large collectors, which were developed for solar district heating and commercial clients with bigger collector fields, consist of an ultrasonic-welded copper absorber with a blue coating. These full plate absorbers with a surface of 2 times 5 metres are manufactured with the help of an ultrasonic welding machine by German company Steckmann. The framing is made of aluminium, the insulation consists of 5 cm thick rock wool, and the glass cover of low iron tempered glass.

The hospital received a governmental subsidy of 70 % of the installation costs. “If you include the 70 % subsidy, the solar investment repays within 8 years, compared to hot water production through gas boilers,” confirms Mannkwi Park, the Managing Director of Jehin. The solar water heating system is made up of a collector field of 1,040 m2, a buffer tank of 43 m3, and an extension vessel which can store 8,000 litres.

Park also announces that the Mirae installation will be monitored for six months as a test demonstration project in cooperation with KIER: “If the results are as expected, we will apply the same collector technology to a 7,000 m2 solar district heating system already in planning”.

Jehin started producing collectors back in 1996. Park focuses its sales on the high-quality segment of the solar water heating market in South Korea with an annual production output of around 10,000 m2 of collector area.