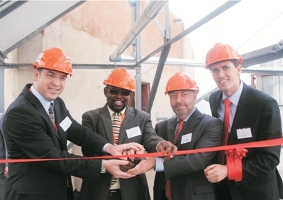 The photo shows the inauguration of the 117 flat panel system above the rooftop of the Legacy Group Hotel Da Vinci, in Johannesburg, South Africa, in March: Cutting the ribbon were (from the left) Daniel Schwab (CEO of Kayema Energy Solutions), Enoch Godongwana (Deputy Minister of Public Enterprises), Dov Segev-Steinberg (Israeli Ambassador to South Africa) and Or Pearl (Israeli trade attaché).
Photo: Kayema

The solar thermal system consisting of 339 m2 of collector area and three 10,000 litre tanks was designed, planned and installed in close cooperation between three different companies: After South African company Kayema Energy Solutions won the tender to deliver a turnkey solar water heating solution, it teamed up with Israeli collector manufacturer Elsol Solar Energy Systems and South African tank manufacturer KBI Engineering to implement the project, with the latter being in charge of delivering the tanks and installing the system.

The solar collector field is capable of preheating 20,000 litres of water in three 10,000 litre boilers before the hot water enters the hotel’s electric heating system. The experts involved in the project estimate the solar thermal output at 320,000 kWh per year, using a simple calculation model: The typical solar thermal capacity in South Africa of 7.5 kW per hour per m2 is multiplied by five hours of sunshine a day and 250 days of sunshine a year. The result is a specific yield of 900 kWh/m2 and year, which is almost twice as high as in Germany, for example.

In order to confirm the output of such high yields in the long term, a monitoring system will measure flow rates, temperatures and water pressure and allow an instantaneous view of the system’s efficiency and performance from any computer desktop.

Solar collectors mounted above ground: Because the roof is used as a fire escape, steel rods were installed to lift the panels two meters up in the air.
Photo: Kayema

The main challenge during the installation of the panels was the use of the roof as a fire escape, which required raising the system above head height to allow people to move under the installation in case of an emergency. In addition, it was necessary to set up a structural steel frame for the panels to guarantee the safety of the system. “The installation took about six month to complete,” Dovvi Finger, Kayema’s project manager at Legacy, explains. Two months were dedicated to the engineering and planning phase of the project; the installation itself took about three months.

The Legacy Group of Hotels has always had a strong commitment when it comes to including renewable energy systems in their construction projects. According to Kayema, the 2 million Rand investment (EUR 213,000), which was financed without any subsidies, will pay back within seven to ten years. “A pay-back period of 3 to 5 years would be more adequate for commercial investors. Therefore we are considering the application for a Clean Development Mechanism (CDM) project,” James Shirley, Kayema’s General Manager, states. Nevertheless, specific costs of 623 EUR/m2 seem very cost-effective, considering the complex requirements on this particular roof.

Text was written in cooperation with communication specialist Hanna Schober based in South Africa. (schober@solrico.com)