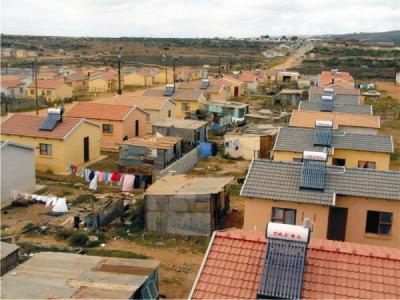 Shortly after Jacob Zuma was sworn in for his second term as South Africa’s president at the end of May, he delivered his state of the nation address, during which he presented his views on the further development of the national energy sector, promising new nuclear power capacities and shale gas utilisation. But he also underlined the need for “a sustainable energy mix of wind, solar, biomass and other technologies that increase the opportunity for rural development.” On 23 June 2014, the newly appointed Energy Minister, Tina Joemat-Pettersson, confirmed South Africa´s continued determination to promote solar thermal energy for heating and cooling and bring relief to the country’s overstrained power grid (see the attached document). “The ANC Government has set a target of an additional 1.3 million solar water geysers to be installed in households in the next five years,” she said. The photo shows subsidised housing with low-pressure solar water heaters in the municipality of Nelson Mandela Bay.
Photo: Nelson Mandela Bay Municipality
Grant programme shifts from low- to high-pressure systems
In 2008, the Department of Energy (DoE) launched its National Solar Water Heater Programme (NSWHP), which was implemented by national utility Eskom and offers rebates for installed solar geysers. According to a DoE presentation before parliament’s Select Committee on Economic Development on 25 February 2014, there were 395,080 mostly low-pressure solar geysers by the beginning of the year – a number lagging far behind the initial target of 1 million installed solar water heaters by 2014. The following table shows the increase in the number of applications submitted under the ESKOM scheme between August 2013 and January 2014, amounting to 19,438 newly subsidised systems.
Increase in the number of solar water heaters subsidised by Eskom scheme (August 2013 – January 2014)
Source for 28 August 2013: http://solarthermalworld.org/content/south-africa-rollout-delay-due-70-local-production
Source for 10 January 2014: http://www.pa.org.za/blog/mps-pleased-rollout-solar-water-heater-programmes-
Eskom restricts support to high-pressure systems with 70 % locally produced technology
The Eskom rebate system has already been changed several times, in order to guide consumers away from imported low-pressure towards locally manufactured high-pressure solar geysers. Since October 2012, people have received higher Eskom rebates when installing locally produced solar water heaters and not imported ones, and at the end of the year 2012, the rebate for low-pressure geysers expired, so that Eskom rebates are currently available only for high-pressure solar water heaters.
Three months ago, the then Energy Minister, Ben Martin, announced the government’s decision to stop subsidising imported solar waters heaters altogether and to still roll out a revised contract model of the Eskom rebate system over the course of the present financial year, which ends on 31 March 2015. In the future, the only systems eligible for rebates will be high-pressure geysers with 70 % of the technology produced by South African companies and the system delivered by Eskom-accredited suppliers. “Under the contracts programme, the DOE and municipalities will identify areas within which system installations are to be undertaken,” one can read on Eskom´s website.
“We will not compromise on local content requirements”
Martin´s successor in office confirmed these plans. “The key to this programme is the localisation of component manufacturing, as well as job creation during installation and maintenance. We will not compromise on local content requirements,” Joemat-Pettersson said at the end of June, without specifying when the new SWH procurement model would become effective. A solarthermalworld.org enquiry about the implementation date of the new general programme conditions was left unanswered by DoE’s Chief Director for Clean Energy, Mogkadi Modise.
South Africa’s solar thermal business representatives expect the change of the Eskom rebate system to have a great impact on the national solar geyser industry. Leon Needham, Owner of Eskom-accredited installer Solar Juice in Western Cape, anticipates a considerable increase in the demand for high-pressure systems. As a majority of the systems are not manufactured in the country, it could mean difficulties for consumers applying for an Eskom rebate. According to Needham, the different climate conditions in South Africa’s provinces require different types of solar water heaters. “In frost-prone areas, such as Ceres and Citrusdal, tube-type indirect systems working with glycol are suitable. But in the Greater Cape Town area, we mostly install direct solar systems with flat panels. Here, tube-type solar systems generate too much heat in summer,” he said.
More information:
Solar Juice: http://www.solarjuice.biz/about-us
https://solarthermalworld.org/wp-content/uploads/2014/07/remarks_energy_ministry_south_africa_june_2014.pdf