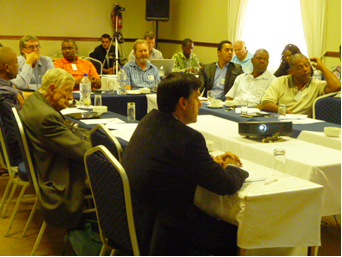 Extended South African National Standard SANS10400 XA, Energy Usage in Buildings, is the big hope of the country’s solar thermal system suppliers. Part XA 2, which was added to SANS 10400 in September 2011, reads: “A minimum volume fraction of 50 % of the annual average heating requirement for hot water shall be provided by means other than electric resistance heating or fossil fuels.” The regulation applies to all new buildings with hot water consumption, as well as refurbished ones if the refurbishment requires planning approval from a local authority (for more details, see the attached architectural guide). After a transition period and a broad discussion among those affected by the new regulation, XA officially became law on 9 September 2014. The photo shows one of the stakeholder meetings within SOLTRAIN, the Southern African Solar Thermal Training and Demonstration Initiative.
Photo: SOLTRAIN
“We expect once again additional growth in 2015, driven by increasing electrical costs and ongoing national grid instability, as well as a trend to larger commercial and industrial thermal installations aligned to the national building regulations SANS10400 XA,” Nicholene Wolfaardt, Sales Manager of solar thermal system supplier and tank manufacturer SEG Solar Energy, confirms. Part XA lists a number of technologies which fulfil the criteria of non-electric hot water supply to newly built and refurbished premises.
Theoretically, the building owner could wind up without an occupancy certificate if the building does not meet current regulations. The responsibility for complying with the building standards rests with the owner.
The Building Regulations South Africa, however, are not generally applied as intended and hoped for. “A substantial contingent of buildings does not conform with the new regulation: Partly, because architects and other consultants do not understand the importance of it; partly, because clients are unaware of the regulation; and mostly because municipalities do not insist on it or verify it properly after construction,” Henning Holm from Holms and Friends, a South African solar solutions provider, explains. The reasons were analysed and discussed during three stakeholder meetings organised by Professor Dieter Holm, regional SOLTRAIN Coordinator in South Africa. They produced the following explanations:
The SOLTRAIN stakeholder meetings recommended a better implementation of part XA of the regulation, as well as a revision of SANS10400 XA, which is in the process of being optimised by Technical Committee TC59 and will be released soon. The experts also pointed out that it was necessary to sensitise South African insurance companies, so that they are ready to upgrade to water heaters in case an electric geyser fails. Currently, the insurance companies have back-to-back-agreements with installers of electric geysers that any defect would mean the replacement of the geyser with an equivalent electric boiler within 24 hours.
More information:
http://www.soltrain.co.za
SANS10400 Part XA is available for download
The article was written in cooperation with Professor Dieter Holm, a South African-based, independent consultant for solar thermal technology and coordinator of SOLTRAIN in South Africa.
https://solarthermalworld.org/wp-content/uploads/2015/01/sans_10400_xa_guide_south_africa.pdf