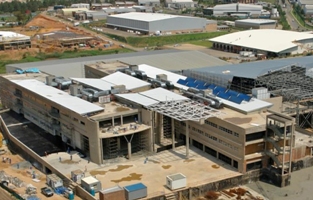 Paulo Davids, Head of solar thermal projects at ABB South Africa, says that, “The payback period of the 140 m2 system will most certainly be achieved within ten years and possibly even shorter if projected energy price increases are taken into account”.
Photo: ABB

ABB’s newly installed 140 m2 flat plate solar thermal system provides hot water for showers in Longmeadow, Johannesburg, which are used by 300 to 400 workers daily. The hot water system was installed by South African company Solar Heat Exchangers and uses reclaimed waste heat from the air conditioning system to supplement the energy required to heat the water. Solar Heat Exchangers is one of the leading specialists in large-scale and residential solar thermal systems throughout Southern Africa.

The new headquarters of South African ABB, a subsidiary of the worldwide provider of power and automation technology solutions, ABB Switzerland, came into operation earlier this year and is an interesting showcase for energy- and water-efficient building design in the South African industry sector. The solar water heater system that was placed on the roof of the facility facing to the north heats the water delivered to the showers inside the building.

The energy expenditure for the building’s heating system is reduced by a heat reclaim pump system that draws in hot air from the air conditioning system. The heat arriving at the heat exchanger is then transferred to the water circuit, which results in hot water accumulating in the three linked 10,000 litre storage cylinders for solar-heated water. Longmeadow Park receives its hot water from the third containment cylinder, at a temperature of 55°C. The tank is constantly replenished by the other two storage cylinders. After circulation, the hot water is returned to the system, guaranteeing that large quantities of water and electricity can be saved in the process. The hot water itself is available 24 hours a day. A common electrical backup system provides the necessary energy to heat the water on cloudy days.

The entire project took just above one year – from the original quote up until final payment. In only 9 months, the components for the solar installation had been delivered, the installation completed and the paperwork signed. The Sustainability Manager for ABB South Africa, Chesney Bradshaw, points out that, “the return on the investment can be high and the payback period relatively short. ABB South Africa also intends adhering to ABB’s “Green Building Policy” that includes an internal verification system for buildings.”

What makes the facility an even more interesting one are the additional green building measures it features: the building’s H-shaped design, its low energy lighting, the appropriate building insulation and its fans with carbon dioxide detection meters. Together, all of the energy-saving measures reduce the building’s energy demand by approximately 30%, as Llewellyn van Wyk, a senior expert on the construction sector at the South African Council for Scientific and Industrial Research (CSIR), summed up in his report about the green building concept.

In its comprehensive product and service portfolio, ABB South Africa offers a wide range of solutions in the field of power and automation technology. The group has a large local manufacturing capacity in South Africa, with seven manufacturing sites spread throughout the country. ABB’s South Africa subsidiary was established in 1992 and employs more than 2,400 people.