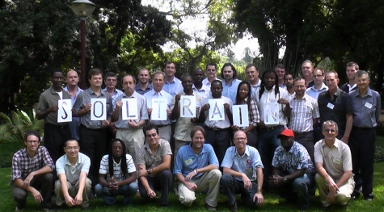 Thirty seven solar water heating industry leaders and academics have just attended the third SOLTRAIN (Southern African Solar Thermal Training and Demonstration Initiative) solar thermal technical training course in Pretoria, South Africa. The training was formally opened by the regional coordinator of the programme, Professor Dieter Holm. In opening, Holm emphasized the value of the hands-on approach to the course under the guidance of a number of eminent experts in the field. The delegates represented a balanced mix from industry and academia.
Photo: Omnibus Engineering

Attendees learned about the basic thermodynamics of solar cooling based on thermally driven cooling technologies, solar thermal software modelling and an analysis of the performance of South African thermosyphon systems and pumped systems based on real monitored data.

SOLTRAIN is a three year programme sponsored by the Austrian Development Agency (ADA) and delegates are drawn from various partner countries. These include South Africa through the Sustainable Energy Society of Southern Africa (SESSA) and Stellenbosch University, Namibia through the Polytechnic of Namibia, Mozambique through Eduardo Mondlane University and N&M Logotech Lda. and Zimbabwe through an organisations called Domestic Solar Heating.

Good attendance from industry and academia “clearly reflects the degree of buy-in from both of these sectors and affords extremely valuable networking opportunities, both within the sectors themselves and across sectors”, said Holm. The participants are correspondingly satisfied with the training. They gave the course a rating of 94% in the feedback session.

Some of the main objectives behind SOLTRAIN are to build capacity in the region’s solar thermal industry with a specific focus on small and medium enterprises, as well as to advocate the use of solar thermal technology at the political level. Southern Africa has one of the best solar regimes in the world and realising this potential could go a long way towards alleviating some of the region’s electricity supply constraints.

Delegate’s participation in the entire programme, which is run by means of a ‘train the trainer’ methodology, is being co-ordinated by AEE Intec, the Institute for Sustainable Technologies from Austria. The programme targets three groups – learning institutions like universities and training centres, small and medium enterprises involved in solar water heating, and policymakers and administrators.

Notable experts involved in this round of the curriculum included Alexander Thür and Rudi Moschik from AEE Intec discussing solar cooling and solar thermal software modelling respectively, Karel Deist and Herman Strauss from the South African Bureau of Standards (SABS) who discussed system testing and the determination of Q-factor (one of the measures of the efficiency of a solar thermal system) and Prof OD Dintchev from the Tshwane University of Technology and Andrew de Wet from the University of Stellenbosch’s Centre for Renewable and Sustainable Energy Studies who discussed the test facilities at their respective institutions.

SESSA, SOLTRAIN’s main implementation partner in South Africa, believes that initiatives such as this are set to enhance and improve the growth of the renewable energy sector in Southern Africa. SESSA also works closely with Eskom to execute its solar water heating rebate programme, and only accredited SESSA installers may be used by end-users wanting to benefit from the scheme.

Stephen Forder is a freelance writer and digital media specialist in South Africa who focuses on energy and sustainability related issues. +2783 603 0559 Skype: stephenforder