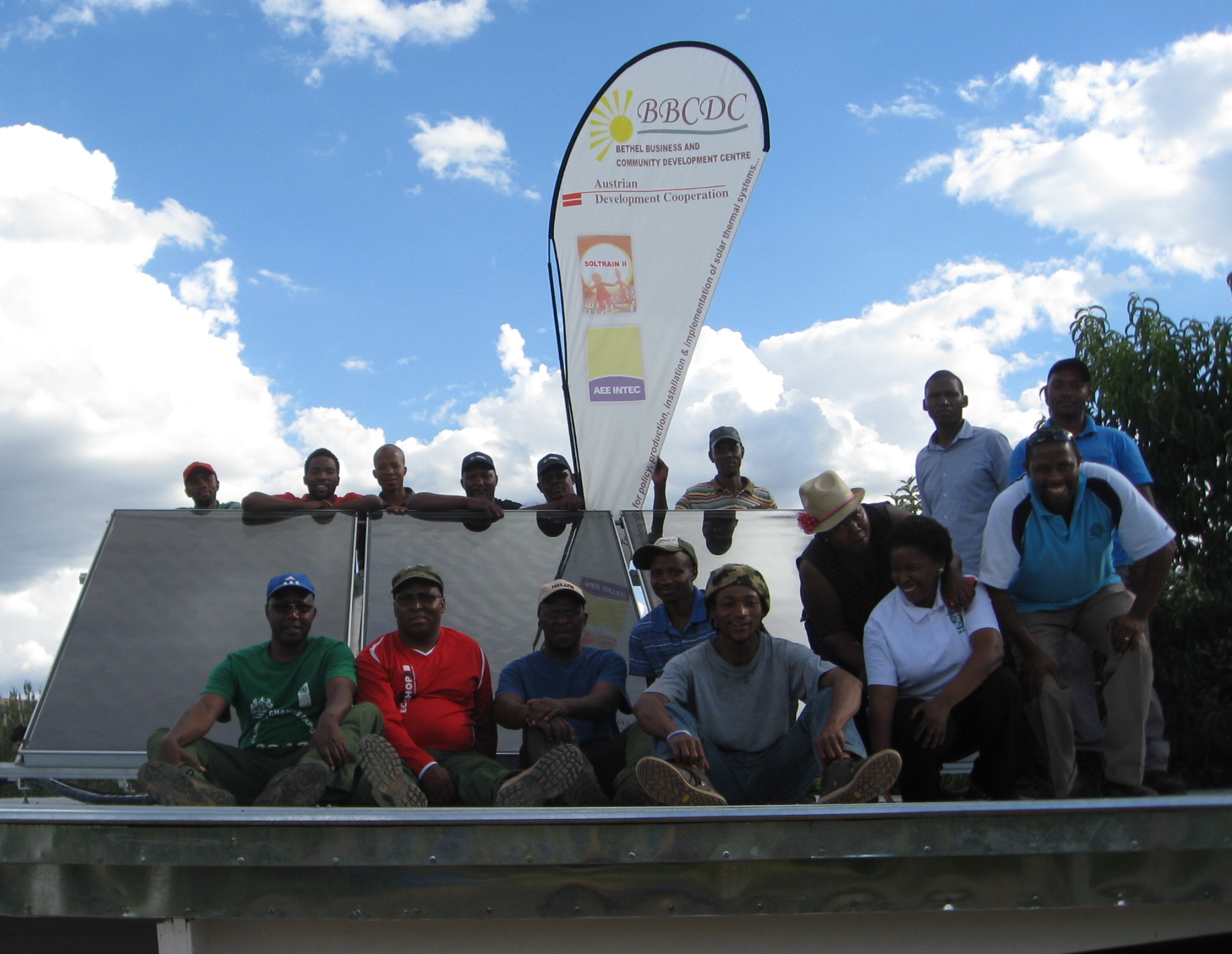 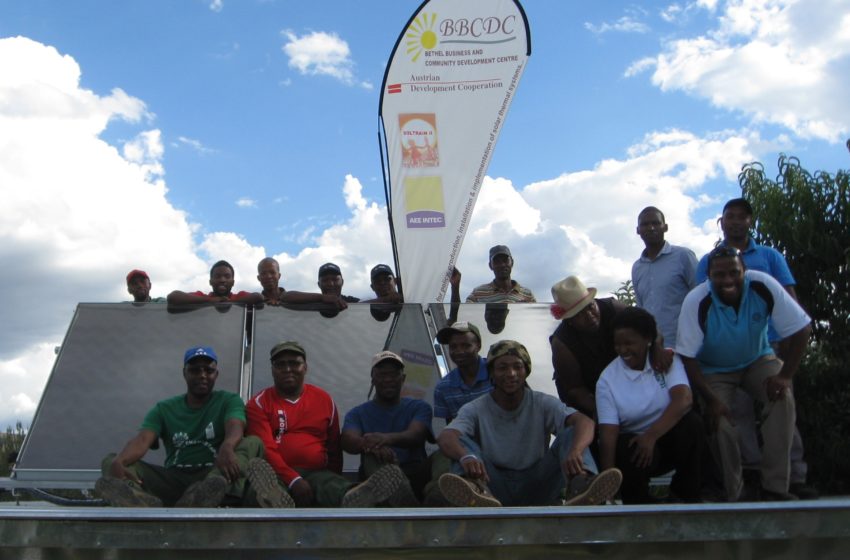 In July 2013, the small country of Lesotho in southern Africa joined the SOLTRAIN project. Between then and the end of phase II of SOLTRAIN – the Southern African Solar Thermal Training and Demonstration Initiative – in February 2016, training courses were held, demonstration projects realised and awareness campaigns carried out. The Bethel Business and Community Development Centre (BBCDC), a commercial and technical school which is in a remote district of Lesotho and has 125 full-time students, has been the main partner organisation supporting these activities. Two solar water heaters at BBCDC, one thermosiphon and one pumped system, were installed during training courses (see photo). Obviously, this has raised awareness of the technology among all students learning and living at BBCDC, who use the solar-heated water every day. The efforts of the BBCDC won the school the Energy Globe Award Lesotho in 2014, 2015 and 2016.
Photo: BBCDC
BBCDC began operations in 1993 with support from UNICEF and the local RC Mission Church. The subjects taught are building construction, solar technology, tourism and hospitality, environmental science, food science and culinary arts.
From the outset, solar energy studies and applications were core curriculum. BBCDC is off-grid and receives energy mostly from solar PV or thermal systems. Thermal systems in particular are widely utilised for water heating, cooking, space heating (passive design), cooling (solar chimneys), greenhouses and daylighting. PV systems are used for lighting, to operate shop tools and equipment, for water pumping and irrigation, for appliances and office equipment. There is even a biogas and a waste water treatment unit augmented by solar energy, along with two small wind turbines. BBCDC operates a commercial enterprise which sells PV equipment and solar water heaters. Additionally, the school generates revenue for salaries and investment by offering building construction, hospitality and catering services.
“The contribution of solar and renewable energy to the operation, management and financial viability of this institution is substantial,” BBCDC’s Managing Director, Ivan Yaholnitsky, said. Radiation science is not just a technical application at BBCDC, but central to an entire framework, which BBCDC refers to as “landscape energy quality”. “The aim of good solar energy engineering and design in the built environment is warmer winter and cooler summer conditions, along with as much technical conversion as necessary,” Yaholnitsky explained. “A critical understanding of oasis and greenhouse effects enable an emerging earth system science that is proactive. BBCDC operates an elaborate and diverse irrigation and water collection distribution system on campus,” he added.

Bread baked in the sun sells well at BBCDC Photo: BBCDC
At BBCDC, solar energy, building construction and catering become intertwined: For example, self-built parabolic trough collectors are employed to bake bread. The bread is placed directly in a tube in the focus of a parabolic mirror configured for a 10:1 concentration ratio, which results in temperatures of 200 °C. Each parabolic mirror can be used to bake 30 or more loaves of bread per day – an ideal cottage industry in a small community. The tube holds four 1000-gram pieces of wet dough and bread is baked in 45 minutes if the sky stays clear. Baked loaves weigh about 950 grams and are sold out quickly each day. Smaller buns and muffins need less time. BBCDC has been using and testing a solar baking facility for more than ten years now, with assistance from Dr Thomas A Lawand, Professor Emeritus at Canadian-based McGill University, and the Brace Research Institute. Yaholnitsky said that with some guidance, there was an opportunity for manufacturing the ovens and setting up small baking enterprises. “Bearing in mind all the pitfalls and trauma of disseminating technology in an emerging market, we are proceeding with caution,” he added.
New skills used in solar water heater installations
During the second phase of SOLTRAIN, six courses coordinated by Austrian institute AEE INTEC were held at BBCDC in Lesotho between January 2014 and January 2016. The training sessions taught a total of 58 students how to install pumped and thermosiphon solar thermal systems. As part of the first training course, the students also installed one thermosiphon and one pumped system on BBCDC’s premises.

Camillus Orphanage is one of 10 non-profit organisations which have received a 50 % subsidised solar water heater. The participants of BBCDC’s training courses used their new skills to install these plants under the supervision of AEE INTEC. Photo; BBCDC
Yaholnitsky and one of his staff members, Sehloho Holomo, also completed a training course on quality checks and the commissioning of solar thermal demonstration systems based on checklists provided by AEE INTEC. The installed demonstration systems were equipped with instruments for monitoring temperatures, solar radiation, the mass flow in the collector loop and hot water consumption. This served the purpose of quality control, while the students were able to learn how to analyse the data.
Promoting solar thermal among government officials, scientists and consumers
To promote solar thermal among policy makers and governmental authorities, two workshops were held in Lesotho´s capital, Maseru, one with eleven and the other with 14 participants from different government ministries and departments, private-sector organisations and the National University of Lesotho. They were presented with information on the domestic and global solar thermal market, successful support mechanisms and national and international initiatives to support renewable energy use in Lesotho.
Yaholnitsky said that these efforts found willing ears in Lesotho’s political circles, as the country had no fossil fuel reserves of its own and suffered from a massive energy deficit, with only 30 % of the population being served by the nation’s electricity grid. “The SOLTRAIN programme has attracted considerable interest from participants, and the thermal road map for Lesotho is fully underway,” he added. The official energy policy published by Lesotho’s government in October 2015 also provides for the extensive promotion of renewable energy across the board, calls for the conversion of all public institutions to solar water heating and requires that every new construction project adopt solar water heating. “The SOLTRAIN Project complements local initiatives which have been well underway,” Yaholnitsky said.
More information about BBCDC:
http://www.facebook.com/bethelbusinessandcommunitydevelopmentcentre/
SOLTRAIN: http://www.soltrain.co.za/