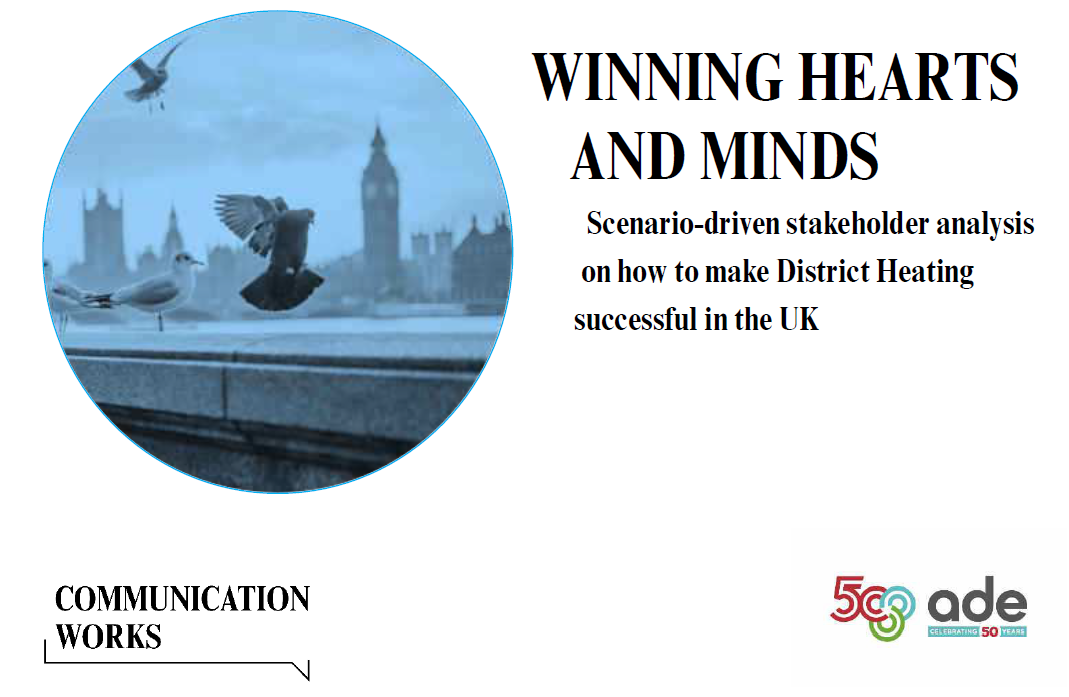 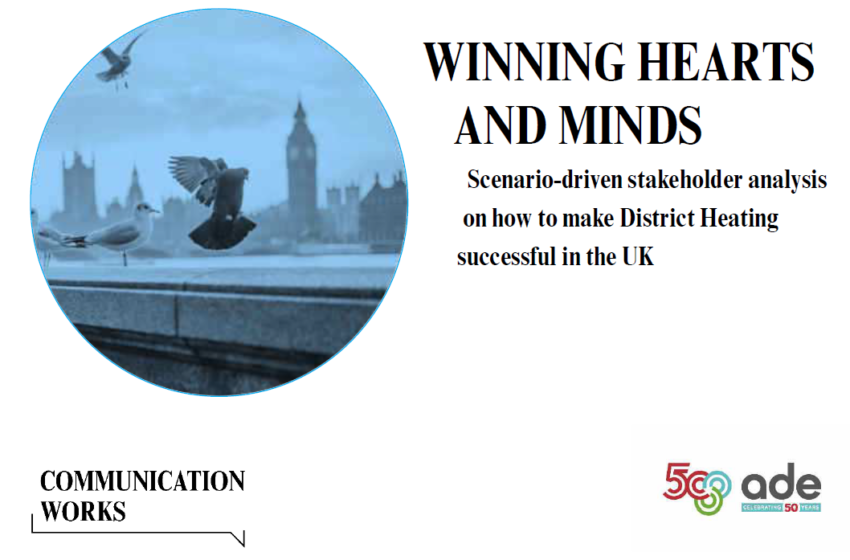 The UK government has clear and ambitious plans to raise the share of district heating (DH) in total heat consumption. GBP (Pound Sterling) 320 million is said to be made available for increasing the number of households connected to DH from 220,000 to 8 million by 2030, or to 30 % of today’s 27 million households in the country. These impressive figures are part of a report called Winning Hearts and Minds – Scenario-Driven Stakeholder Analysis on How to Make District Heating Successful in the UK, a combination of scenarios and online surveys developed jointly by German-based Communication Works and the Stockholm School of Economics on behalf of the UK’s Association for Decentralised Energy. The aim is to find suitable avenues for popularising DH among heat users in the country.
The research highlights prices as being a major concern to consumers and the severe difficulties of not being able to influence price policies in the case of DH connections. Still, it also showed that users do care about other issues such as environmental and social factors, community impact and additional services, for example, energy efficiency measures, and electric cars, not to mention the possibility of easy contract termination.
Communication Works conducted its online survey among a representative sample of the British population (773 participants) in April 2017. Given district heating’s very low market penetration of about 2 %, the technology is known only to a small minority of UK citizens. The survey shows that as little as 19 % of the respondents knew about DH and 11 % were unsure – which means about three-fourths were not aware of DH at all.
The key objective was to find ways for mitigating the overall negative image of DH regarding prices and tariffs as well as environmental and social aspects. While customers greatly value the chance to become co-owners of a DH network, being able to have a say in relevant decisions appears to be much more important. Additionally, the authors stress that opt-out schemes increase acceptance beyond the initial score and point to Scandinavia: In Sweden, new tenants who move into an apartment or house with district heating can opt out after three months and choose another heating technology, for example a heat pump, but most of them choose to stick with what they have due to attractive offerings, good products and services.
Positive opinion of solar thermal in DH
Source: Communication Works
Go solar? Yes, please!
Environmental efforts – to reduce CO2 emissions and achieve 100 % renewable production in DH – get a high score in the survey. To be more precise, the idea of renewable-only DH ranks particularly high among the younger generation (below 40 years of age), whereas CO2 reduction, a more well-known global issue, is rated slightly more positive by people between the ages of 41 and 50.
The authors of the report state that “the UK is no exception to the rule: People love solar energy,” and add that the technology “is by far the most popular heat source for UK citizens.” They say that the findings show 65 % of respondents to have a favourable or very favourable opinion of solar thermal use in DH.
Websites of organisations mentioned in this article:
Communication Works: http://www.communicationworks.eu
Stockholm School of Economics: http://www.hhs.se
Association for Decentralised Energy in the UK: http://www.theade.co.uk