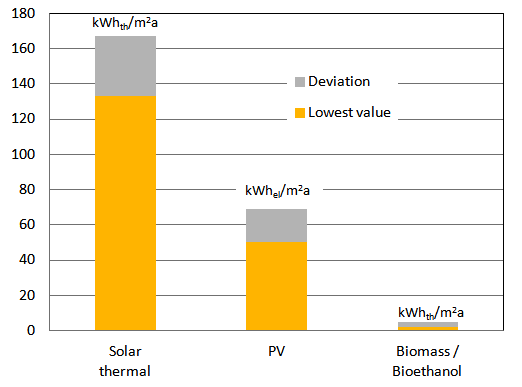 The annual energy yield per square metre is much higher for solar collectors than for other renewable technologies, as the figure on the left shows. Compared to PV, solar collectors produce, on average, three times as many kilowatt-hours. Compared to biomass or bioethanol, output is in average as much as 43 times their yield. The chart shows end energy production and compares directly thermal and electric kilowatt-hours. The grey part of each bar marks the deviation in yield based on different estimates. The absolute values can be found in a table at the bottom of this article.
Source: Fraunhofer ISE, PlanEnergi and Chalmers University
Technologies for direct solar use, such as solar thermal and PV, will always generate higher yields per square metre than wind energy or biomass, which are linked to solar indirectly. This article considers assessments by several experts to quantify area-based renewable yields: Florian Dallhammer and Christoph Kost from the Fraunhofer Institute for Solar Energy Systems, Germany, Jan-Olof Dalenbäck from Chalmers University of Technology, Sweden, and Per Alex Sørensen from Danish consultancy PlanEnergi.
Dalenbäck and Sørensen have found that a large-scale collector field in Denmark produces around 450 kWh/m² of collector area. Additionally, measurements of large fields in Austria and Denmark have shown output to range between 400 and 500 kWh/m². Both experts regard 3 m² of ground to be required for installing 1 m² of collectors, meaning area-based annual solar thermal results are between 133 and 167 kWh/m²a.
Dalenbäck and Sørensen then did the same calculations for photovoltaics, which led to 150 kWh/m²a and the same 3 m² of ground for 1 m² of panel area. This means an area-based yield of 50 kWh/m²a.
Their estimate was confirmed by Dallhammer and Kost from Germany. While evaluating the space requirements of different renewables, Dallhammer and Kost found a PV plant to operate for 1,000 to 1,100 full-load hours. 1 MWp of PV capacity would require 1.6 to 2 hectares of land. This results in an electric yield of between 50 and 69 kWh/m²a. This range also covers PV systems on inclined roofs, where the total roof area (including the unused side, e.g. the north) had been part of the calculation.
Regarding biomass, the Fraunhofer researchers found that 50 tonnes of maize silage could be harvested per hectare of land. This silage could then be used to generate 18.5 MWh of electricity or 1.85 kWh/m²a. Obviously, biomass could be more efficient at producing heat.
Sørensen also estimated the yield from biomass heat production. He found biomass output in northern Europe to be around 12 tonnes of organic dry matter per hectare (10,000 m²). One tonne was around 5 MWhth or 5 kWh/m²a. He said that if ethanol had been produced from biomass, efficiency would have perhaps been 30 %, meaning a yield of around 1.5 kWh/m²a.
Dalenbäck’s estimates are in the same range. Fast-growing solid biomass, e.g. reed canary grass, can be used to produce 20 to 40 MWh per hectare on best farming land. Heat-only boilers with exhaust recovery will increase efficiency to 100 % and result in an area-based yield of 2 to 4 kWhth/m².
Annual energy yield per square metre for different renewable – base for the chart above.
Source: Fraunhofer ISE, PlanEnergi and Chalmers University
Websites of organisations mentioned in this article:
https://www.ise.fraunhofer.de/en.html
http://www.chalmers.se/en/Pages/default.aspx
http://planenergi.dk/