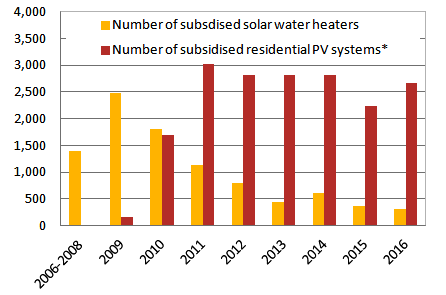 The Mediterranean island of Malta is a paradise for all those who enjoy basking in the sun. But despite the country’s high levels of solar irradiation, its people haven’t yet warmed to solar thermal. A recent study by Malta’s Regulator for Energy and Water Services (REWS) has shown a declining number of new subsidised solar water heaters, while demand for residential PV installations remained high between 2011 and 2016 (see chart based on pp. 9 and 10 of the attached document).
Source: REWS, formerly Malta Resources Authority
Whereas 1,390 applications for solar thermal incentives had been approved in 2008, government support was granted for only 307 in 2016 despite no changes to the scheme in the meantime. Even today, homeowners can receive up to 40 % of the costs when they invest in a solar heater, capped at EUR 400, just as they were able to in recent years (for more information, please see the database of incentive programmes).
On the other hand, the number of approved applications for residential photovoltaics grew rapidly, from 154 in 2009 to over 2,000 per year in 2016. It peaked in 2013 at 8,443 PV systems, a figure that has been distributed evenly across 2012 to 2014 with no submitted applications to show the overall trend.
According to EurObserv’ER, Malta ranked below even the Baltic states in 2016. With a mere 768 m², it had the lowest amount of newly installed collector area among all 28 EU member states (see the attached document). It needs to be noted, however, that at the end of 2016, it came in 6th behind Germany in terms of solar thermal capacity in operation per capita. The island with a population of 433,000 got to 0.083 kWth per head; the average in Germany was 0.163 kWth.
Malta´s huge solar thermal potential really shows when these factors are compared to the ones of Cyprus, Europe’s undisputed leader in the field. Both Mediterranean islands have a similarly favourable climate, but at 0.535 kWhth per capita, Cyprus had six times as much solar thermal capacity.
The EU’s Energy Performance of Buildings Directive will pose an enormous challenge. From 1 January 2019, all new and to-be-renovated government administration buildings will have to meet the nearly zero energy standard. Another 2 years later, the same regulation will also apply to new and to-be-renovated residential structures, as set forth in a 2012 Legal Notice turning the directive into national law. Solar thermal energy could certainly help Malta achieve these targets. But as the above figures show, Malta’s population seems reluctant to adopt the eco-friendly technology. Dr Charles Yousif, Assistant Lecturer at the Institute for Sustainable Energy of the University of Malta, knows why. People in Malta, he explained, prefer photovoltaics to solar thermal: “They are convinced that PV needs less equipment to be installed and is eligible for higher subsidies. Because of the feed-in tariffs, people consider photovoltaics to be an attractive option for investment.”
Quality and shading issues
Yousif also mentioned quality issues. “At the start of the scheme, you had solar water heaters of inferior quality on the market and word spread about how bad they turned out to be,” he said. “People also believe solar heaters produce hot water during the summer period, when it isn’t required.” He called on the government to make the incentive scheme more attractive, so the market could grow. Currently, it covers “only some of the costs, but not retrofit components such as pipes, insulation and the connection to the existing hot water system in the building.”
Another challenge is the unique design of Malta’s building stock, often with too little roof space for a solar thermal installation. In these cases, Yousif suggests heat pumps as a suitable alternative, since the same 40 % incentive applies to them. “But even if there is enough space to install solar collectors, there’s always the risk that a neighbour could receive a permit for an extra floor, which might shade your own collector area,” he explained. “All of this discourages people from installing solar water heating systems.”

Yousif is convinced that a mandatory solar thermal percentage to meet hot water needs in newbuilds could reinvigorate the market.