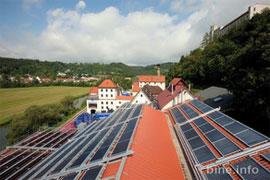 Solar heat for Industrial Processes (SHIP) has a large potential and is an important, upcoming market for solar thermal – this was the conclusion which Christoph Lauterbach, Research Associate at the German University of Kassel, drew in his presentation at the Intersolar Europe 2012 in Munich. In the case of Germany, Lauterbach identified a potential of 16 TWh/a. This is 3.4% of the country’s total energy consumption and corresponds to 36 million m² of collector area. According to Lauterbach, the overall potential for the 25 EU members amounts to 70 TWh/a – approximately four times as much.
Photo: http://www.solar-process-heat.eu

The United Nations Industrial Development Organization (UNIDO) estimates that the global potential of solar process heat lies at 1,556 TWh/a until 2050, which would mean a capacity of 2,445 GWth. But, the International Energy Agency’s Solar Heating and Cooling programme (IEA SHC) counted only about 200 solar process heat systems worldwide until 2010, corresponding to a total capacity of 42 MWth. The country list is headed by India (10 % solar process heat of total installed solar thermal systems in 2010), Brazil (7%) and Israel (6%). “There is still a lack of awareness among industry stakeholders, a shortage of specialised planners, and not enough planning and design tools,” Lauterbach explained in Munich.

About a third of the process heat applications in Germany have temperature requirements which could be met by non-concentrating or moderately concentrating solar thermal systems. “We already have collector types for the different temperature levels of up to around 250°C. Which type to choose will be determined by the temperature level required,” says Lauterbach. For example, flat plate collectors can be used for temperatures of up to 80 °C in cleaning, washing or preheating. In case of temperatures between 80 and 120 °C, Lauterbach recommends vacuum tube collectors or advanced flat plate collectors with high operating temperatures. The level between 120 and 250 °C seems to be most appropriately covered by CPC, Fresnel, or parabolic through collectors. These temperatures are required, among others, in cooking, drying or compression.

In addition to the available technologies, Lauterbach also discussed options for industrial process integration. “The choice of integration type is a very important one,” says the expert. “The integration can be done at the supply or process level.” The first option will feed the solar energy into the heating circuit (steam or hot water) and is accompanied by a high default temperature and simple, not process-related system integration with only a small number of system layouts. The latter method uses the solar energy directly for the process. This results in more complex, process-related system integration and a wider range of system layouts. An example for the integration on a process level is the solar thermal plant at the Hofmühl Brewery in Germany (see photo above), which has 735 m² of CPC ETC collectors and two 55 m³ solar buffer tanks. Here, the solar thermal system supplies three different consumers depending on the buffer tanks’ temperature. “The industrial plant yield is usually higher than in domestic applications,” Lauterbach sums up the issue, “but this means also higher expectations by the investing companies.”