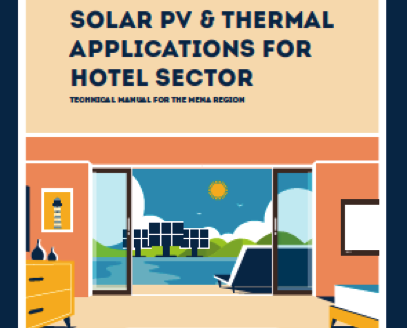 Solar thermal can easily provide cheap, secure and clean heat to drive growth in the tourism sector. But what about optimal system sizes and applications? A new brochure has been trying to find answers to this question. Titled Solar PV & Thermal Applications for Hotel Sector, it has been created jointly by the German Agency for International Cooperation and the Egyptian Regional Center for Renewable Energy and Energy Efficiency as part of a project called Re-Activate: Promoting Employment through Renewable Energy and Energy Efficiency in the MENA Region.
Image: GIZ, RCREEE
The manual focuses on solar for providing energy security in countries in the Middle East and North Africa (MENA), where a lack of stable energy supply prevents the tourism sector from becoming sustainable in the long term. This was particularly evident during the Arab Spring in 2011, when widespread blackouts were part of each day, the authors emphasise in the document’s introductory chapter. Since then, political turmoil and stagnating economies have made it clear that the MENA region requires a new strategy for guaranteeing supply.
Starting with a short chapter to describe solar energy basics and a long one detailing photovoltaic systems, the document gets to solar thermal in the fifth. It offers an analysis of basic data and requirements, including solar coverage factors, for sizing systems that deliver heat to hotels, mainly to meet sanitary hot water demand. It then lists technical specifications and quality standards regarding vital components.
The next section shows best practice examples and an installation checklist, including 7 dos and don’ts based on the most frequent mistakes made by inexperienced installers (see pp. 172 ff.).
Quality matters: Egypt case study
The concluding chapter describes a case study on solar use at a hotel in the MENA region. Located in El Gouna, Egypt, it consists of a 79- and a 155-bedroom building, the latter with a pool. The smaller structure has already seen the installation of a solar thermal system and an electric backup, while a diesel boiler provides thermal energy to the bigger one as well as the 300 m² pool.
The solar thermal plant is currently not operational. The low-quality materials that were used in its construction have led to many defects. For example, the system has shown signs of corrosion on both the collectors and the support structure. In a coastal area such as this one, corrosion protection should have been dealt with during installation.
German-based Aschoff Solar has offered two solutions for solar heat supply, as summarised in the table below. Both lead to reasonable payback periods of around 5 years.
Pre-feasibility study on solar hot water demand at a hotel in El Gouna. Both solutions are calculated against electric heaters. The payback time bases on a 20 % increase in fuel prices each year. Electricity costs in the 1st year of operation are 0.114 EUR/kWh and the energy efficiency of the electric hot water system is 90 %.
Source: GIZ, RCREEE
Brochure Solar PV & Thermal Applications for Hotel Sector for download
Websites of organisations mentioned in this article:
GIZ: http://www.giz.de/en/
RCREEE: http://rcreee.org
RE-ACTIVATE: http://www.giz.de/en/worldwide/36137.html
http://www.aschoff-solar.com