Usually, solar district heating (SDH) plants require large fields for collector installations, which has raised concerns at local level because of competing land uses and a system’s potential visual impact on the surroundings. One way out of this dilemma is to combine heat generation and fruit and vegetable harvest (see illustration). As part of SDHp2m…From Policy to Market, a Horizon 2020 project, some regions are looking to create regulations based on best practice examples of land use or spatial heat planning. This article will present showcases from the Styria region in Austria, Hamburg in Germany and Valle d’Aosta in Italy (see also the attached fact sheets).
Graphic: Hamburg Institut Research
In the metropolitan region of Hamburg, several SDH projects have failed because of a lack of suitable areas or because they lost out against residential buildings, roads, nature habitats or industrial, agricultural or commercial facilities. The Hamburg Institut Research (HIR) is now developing best practice guidance and policy recommendations to tackle this barrier. It established five main categories:
In the second category, Hamburg shows large application potential in areas storing sewage from the Elbe river. For example, the fields covered in sludge at the port of Hamburg-Altenwerder (see the map below) could provide enough space for about 40,000 m² of solar collectors, with some challenges remaining, such as the lack of a nearby district heating network and a legal permit for SDH systems on these hills.

Potential site for SDH plant on sludge fields at Hamburg-Altenwerder port in Germany
Photo: Google Maps
Solar in spatial planning
In the Austrian region of Styria, almost all DH networks which require significant hot water amounts in summer are in urban areas, where land is quite expensive. Additionally, the owner of the property expects its value to rise, which usually leads to higher rental costs and sale prices and threatens the economic viability of SDH plants.
Together with Austrian-based research institute AEE INTEC and system supplier S.O.L.I.D., the regional government has been trying to rectify the situation by devising new policies which would allow the installation of SDH systems in agricultural priority areas and green zones. The first step has been to establish a broader consensus about the future need for energy supply mainly from local renewable sources, essentially by evaluating energy demand in spatial planning. There will be one pilot study each about three municipalities to analyse the situation. 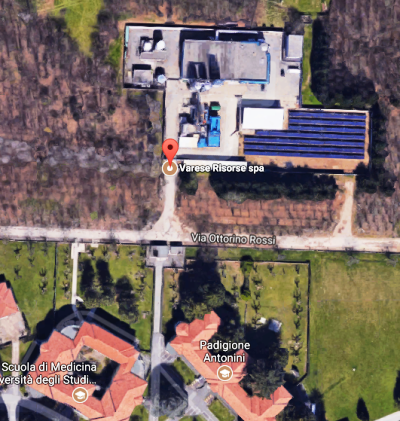 Satellite view of SDH plant in Varese, Italy
Image: Google Maps
You can’t compare our systems to PV installations: Italy
The case of Italy is a rather peculiar one, as the main competitor for land use is photovoltaics. The widespread and mostly unchecked deployment of large ground-mounted PV plants because of generous feed-in tariffs has prompted a quick and harsh response by many regional administrations, leading to stringent rules on new ground-mounted solar systems. Even though these requirements make no explicit mention of solar thermal collectors, the technology falls within their scope automatically.
To counter this unfortunate development, Ambiente Italia has been cooperating with the Valle d’Aosta region in northwest Italy and other local stakeholders, such as district heating utilities, to find a solution based on a multi-level approach:
What likewise proved to be very effective when interacting with local stakeholders has been to show them existing SDH plants via satellite images. The example above depicts the first and only SDH system in Italy, a 990 m² installation in Varese, north of Milano. The image highlights the small area that is occupied by the system compared to the space needed for residential districts, other facilities and the town itself.
The article was written by Riccardo Battisti, a solar thermal consultant and market researcher working at Ambiente Italia (Rome, Italy).
Websites of organisations mentioned in this article:
AEE Intec: www.aee-intec.at
Ambiente Italia: www.ambienteitalia.it
Hamburg Institut Research: www.hamburg-institut.com
Regional government of Styria: www.steiermark.at
SDHp2m project: http://solar-district-heating.eu
SOLID: www.solid.at