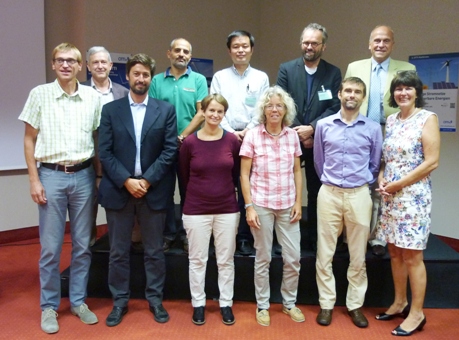 Diligent research on small scale low-temperature chillers, the launch of a new generation of compact solar cooling units and large-scale plants able to compete economically with conventional cooling solutions: These are just some of the main trends which were discussed during the 6th International Conference on Solar Air-Conditioning organised by German company East-Bavarian Institute for Technology Transfer, OTTI, Rome, Italy, on 24/25 September. The photo shows Conference Chairwoman Prof Ursula Eicker from the University of Applied Sciences, Stuttgart, Germany (forth from left in first row) together with the international scientific committee consisting of researchers from Germany, Spain, Greece, Italy, France, China, Austria and Cyprus.
Photo: OTTI
Diligent chiller research
The first message from the conference presentations is that several research institutes and laboratories from all over the world are currently working on the development of a new generation of small-scale sorption chillers which could be easily coupled to solar thermal and other sources of low-temperature thermal energy, such as waste heat. For example, Rogério Gomes de Oliveira from the Federal University of Santa Catarina in Brazil presented a prototype using sorption technology with sodium bromide (NaBr) as the sorbent and ammonia as the refrigerant. The system can be activated through temperatures of between 65 and 75 °C (such chillers usually need about 80 °C) and reach a cooling power of about 1 kW, albeit at a rather low thermal coefficient of performance (COP) of 0.28 to 0.36. The thermal COP is the result of dividing the amount of cooling energy by the solar heating input to the chiller (see the attached presentation).
Despite fervent research activities, the aforementioned solutions have not yet been cost-competitive compared to conventional compression chillers, especially if the conventional systems run on low-cost electricity. Additionally, it is difficult to ascertain whether such pilot developments can explore real market potential over the short and medium term, as there is a lack of reliable data on costs and, especially, on the cost-saving potential in mass production.
From research to market prototypes
Research activities have also led to some interesting showcases of market application. Italian company Solarinvent, a University of Palermo spin-off, is producing a solar-only compact unit for open-cycle desiccant cooling to do away with the need for auxiliary energy. The basic model, with 2.4 m² of solar collectors and a total weight of 230 kg, has a maximum cooling power of 2.7 kW and, for example, can be used to air-condition a small office.

The average COP is 1.1, as open sorption systems usually reach COPs higher than 1.0, and collector efficiency has reached 57 % thanks to the quite low operating temperatures of between 45 °C and 65 °C required by the adsorption bed. Another promising feature of the desiccant bed is its use as storage to allow cooling even after sunset. Being an open-cycle system, it requires air ducts and, therefore, the most convenient application is the cooling of floors closer to the roof.Because of the high cooling demand and rich solar resources, Italy was one of the most appealing markets for solar cooling, emphasised Marco Beccali from the Information Engineering and Mathematics Modeling division of the Department of Energy at the University of Palermo. So far, only 30 plants have been in operation across the country and 8 are under development at military premises. Unfortunately, the national Conto Termico incentive scheme, which includes support for solar cooling technology, does not seem to be appealing enough compared to the money required to invest in such systems. Still, it is worth noting that 10 universities and research centres in Italy have been carrying out experimental testing on solar cooling plants.

Another compact application presented at the conference is a Dutch development: Solabcool, a sorbent unit with a nominal cooling power of 2 or 4 kW. It requires operating temperatures of between 60 °C and 95 °C and achieves a thermal COP of about 0.6. Currently, the largest unit costs around EUR 10,000, but the price is expected to drop to about EUR 7,000 in 2017.
Competitive systems are available
Besides research activities and prototypes, the conference also presented already operating solar cooling plants, which came out on top in the battle of technologies, especially regarding large-scale systems. Christian Holter, CEO of Austrian company S.O.L.I.D., showed several examples of large-scale solar cooling systems with up to 5,000 m² of collector area and payback periods of between 8 and 12 years (see the attached presentation).
Two plants deserve special mention: The first one, which was developed by S.O.L.I.D. in Kosovo, supplies energy to a high-rise office building and has been operating for 12 years without experiencing any major failures or difficulties. The second is the large plant at the United World College in Singapore, which provides hot water as well as heating and cooling to a college with dormitories. The latter plant was designed to have a hot water solar fraction of 100 %! Hence, it came with a gas boiler as per customer request, but the boiler has never been connected to the system. The solar fraction for cooling is said to range from 30 % to 80 %. The O&M costs of such large plants have been reported to be hardly relevant and have always been below 2 % of the initial investment.
Another interesting example is the 4,885 m² solar cooling plant at the Desert Mountain High School in Arizona. The school with around 3,000 pupils has been supplied with a remarkable cooling capacity of 1,750 kW. After 15 months in operation, the monitoring records show a thermal COP of between 0.7 and 0.75. According to Holter, the electrical COP is between an enormous 25 and 30 on full-load cooling days, which means that up to 30 times more cooling energy is produced than electricity consumed on those days. A relevant lesson learnt from this system setup has been that the plant can be optimised by adjusting the chiller settings which sometimes requires a chiller operation not fully in agreement to what was recommended by the manufacturer. For example, regarding the Arizona plant, the chiller’s heat supply is between 65 °C and 110 °C – quite a wide range, which goes well beyond the manufacturer’s specifications. The philosophy behind this approach is to no longer view the chiller as a black box, but try to adapt the technical specifications of the chiller to match other plant components.
More information:
6th International Conference on Solar Air-Conditioning: http://www.solaircon.com
Federal University of Santa Catarina: en.ufsc.br/
Solarinvent: freescoo.com/
Solabcool: http://www.solabcool.com/
https://solarthermalworld.org/wp-content/uploads/2015/10/christian_holter_solaircon_september_2015.pdf
https://solarthermalworld.org/wp-content/uploads/2015/10/solaraircon_oliveira_public_september_2015.pdf