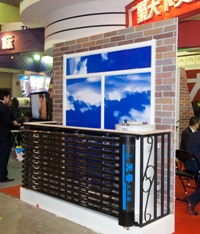 Solar systems on the balcony: This is the answer to the space problem in the mega-cities in the eastern part of China. Solar obligations force system suppliers to work on systems which can be used on the balcony as shown in this solar exhibition. Already 6 provinces implemented solar building codes.
Photo: Sven Tetzlaff

The cities and provinces are the frontrunners in terms of the solar building codes in China. Just this year, the city of Weihai in the Province of Shandong and the province of Anhai have implemented new solar regulations for their municipalities. Altogether there are already more than 10 cities which have issued regulations, as well as several provinces such as Hainan, Jiangsu, Fujian, Hebei and Yunnan (see the following table).

The starting point for the implementation of solar building codes was the Chinese Renewable Energy Law, which came into effect on 1st January 2006. “Since then, the whole ofÂ society has paid a lot of attention to renewable energy”, said Runqing Hu, assistant professor of the Center for Renewable Energy Development in Beiijing, China, in her presentation in March 2008 in Wels, Austria.

Article 17 in this law makes clear that “the government encourages companies and individuals in the installation and use of solar water heating systems, solar heating systems and solar cooling systems.” Furthermore, this article states that “local construction authorities should cooperate with relevant authorities of the state council in establishing technical and economical standards with regard to the combination of solar energy systems and constructions.” The solar retrofitting of buildings is also mentioned in the Chinese Renewable Energy Law. “For already existing buildings, residents may install solar thermal systems according to technical standards under the condition that their quality and safety is not affected, unless agreements have been otherwise.”

Or see the English Google Translate version of the site