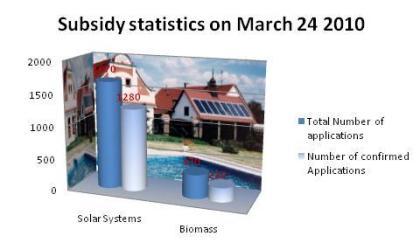 Just over a year ago, on March 20 2009, Slovakia launched its first subsidy programme for solar collectors and biomass boilers: After a modification of the formal requirements and the amount of subsidies one can receive, the programme’s figures have shown a great improvement lately.
Figure: SEA


According to the latest press conference by the Slovakian Economy Ministry in March 2010, 1,670 applications for solar thermal systems were registered until 24 March, out of which 1,280 have already been approved. With only 370 applications – and 220 already approved among them – biomass boilers were the less popular choice. All in all, one fourth of the total programme budget of EUR 8 million was spent until 24 March 2010.

One of the successes of the subsidy programme, according to Karel Hirman, Director of the energy division at the Slovak Innovation and Energy Agency (SEA), is that it keeps unemployment down in the country, as approximately 50% of the installed collectors have been manufactured locally. Installations, too, have been performed almost entirely by Slovakian companies.

The success was not an apparent one right from the start: The figure above shows that most of the budget has been distributed over the course of the last few months. Milan Novák, Director of Slovakia’s largest solar collector manufacturer, Thermosolar s. r. O, reported that, “not a single application was approved in the first three weeks after the programme’s initiation, even though tenths of thousands of people informed themselves about the subsidies, either through the company’s website or by telephone”. Even four months later, the situation had not improved significantly: Only 300 people had applied for a subsidy until the end of August.

According to Novák, there had been several aspects discouraging people from sending in an application. First, there was too much administrative work associated with submitting an application: "It’s ridiculous that people had to submit 10 different forms for a 500 or 600 EUR subsidy. In order to go out and get these forms, they would have to take several days off work just to have enough time to visit all the different bureaus that issue the forms." Second, prices for systems talked about in the media were often much higher than actual prices when sold. “Instead of 4,000 to 5,000 EUR, one can purchase a system for a third less,” says Novák.

Due to the difficulties mentioned above, the programme had to be modified in several areas before it was re-introduced to the public on 20 August 2009. For example, the subsidy was doubled, from 100 EUR/m2 to 200 EUR/m2, and some of the excessive paperwork was reduced as well. Out of the ten different forms people had to submit before the re-structuring of the programme, only six remain in use to date.

Novák thought very positive about the re-structuring efforts: “Due to these changes, the Slovakian subsidy system is getting to a level similar to that in Germany and other developed countries and is hopefully going to trigger the same great interest in solar systems among the population”.  According to Thermosolar’s director, the current subsidy covers about 35% of the total investment in a new solar system or biomass boiler. ”It is certain that a subsidy of 1,000 EUR is worth getting all the necessary documentation,” Novák explains, satisfied. And he probably shares this opinion with many others – as shown in the growing number of applications since August in the figure above.

The text was written by Vladislava Adamenkova, a Czech student of international business studies in Vienna, Austria.