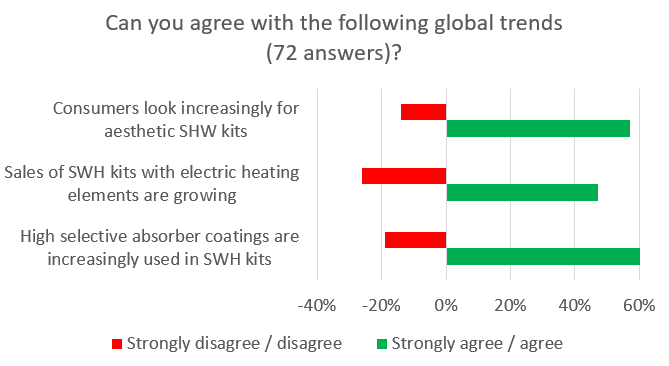 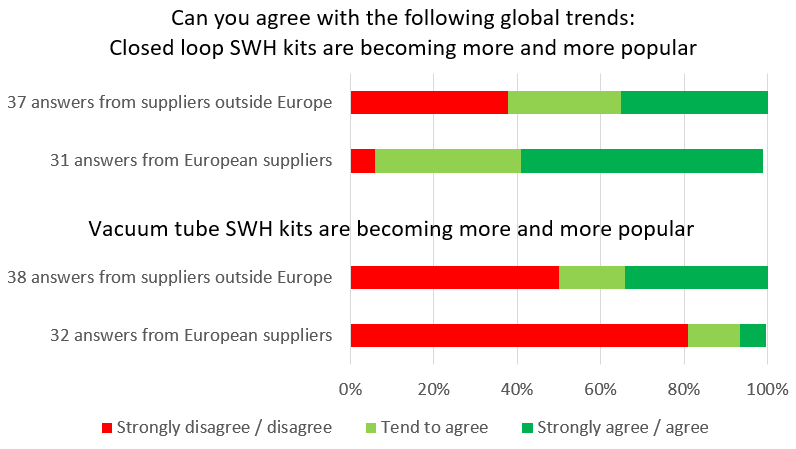 Consumers are paying increasing attention to the design and quality of solar water heater systems, confirmed most of the SWH kit suppliers responding to a global survey by German market research agency solrico in November and December last year. Businesses agreed with the statement that a growing percentage of the SWH kits they sell is equipped with an electric element to guarantee hot water production in cloudy weather. Likewise, a majority confirmed that they are using more and more highly selective coatings for the absorbers in their systems. The percentage of suppliers that agreed with the above statements was about the same regardless of whether they were based in or outside Europe. The attached pdf lists all the 78 companies that responded to the survey.
Source: solrico survey Nov./Dec. 2018
To improve the competitiveness of SWH systems compared to other hot water production devices, companies needed to offer “high-quality products with a long service life,” said Amjed Sibai, General Manager of Tunisian-based Sines Industrie. Manos Monogios, Export Manager at Papaemmanouel, a supplier based in Greece, responded in a similar manner when the question turned to measures for making solar thermal more attractive. “We need to aim for maximum efficiency, minimise payback periods and increase the economic life of kits.”
Vacuum tube collectors lose popularity
The following chart shows two developments that SWH suppliers based in and outside Europe had a fairly different view on. A majority (94 %) of the European companies agreed or tended to agree with the statement that “closed-loop SWH kits are becoming more and more popular”, whereas only 62 % of manufacturers based outside Europe saw it the same way. In a closed-loop system, thermal energy flows in a closed circuit and is transferred to the storage tank by means of a heat exchanger. This will prevent corrosion and scale in the solar circuit but lower efficiency owing to the heat transfer unit.

Responses from companies based in and outside Europe
Source: solrico survey Nov./Dec. 2018
In recent years, the number of vacuum tube collectors used in residential systems increased significantly in major markets outside Europe, such as Turkey, Mexico and India. Of those that participated in the survey, every second non-European company agreed that this was still the case. By contrast, 80 % of European SWH kit suppliers did not think vacuum tubes were becoming more popular.
Heat pump and PV are strong competition
The last section titled “Can you agree with the following global trends” asked for technologies that were competing with solar water heaters. The responses from companies based in and outside Europe were fairly similar. The results at global level can be found in the following chart.

Technologies competing with solar water heaters
Source: solrico survey Nov./Dec. 2018
The question about competing technologies was a polarising one for SWH kit suppliers. Almost the same number of respondents (strongly) agreed or disagreed that there was competition from heat pumps or PV. These controversial results originate with differing national circumstances. In Greece, PV is barely making a dent in SWH sales, while in the United States, PV and a low gas price remain the biggest barriers to growth. The difference can also be explained as a result of the respondents’ attitude towards integrated systems. For example, Erich Temper, Technical Director at Gasokol, an Austrian collector manufacturer, was convinced that solar thermal would be greater competition as soon as the benefits of combining the units with other heat generation devices e.g. heat pumps became well known.
The results of the survey have also been part of two other news articles on solarthermalworld.org:
Southern Europe: A good place for SWH companies to do business
Exciting prospects in Kenya, Morocco and the UAE
Organisations mentioned in this article:
http://www.solrico.com
http://www.sines-industrie.com
https://www.papaemmanouel.gr/
http://www.gasokol.com/
https://solarthermalworld.org/wp-content/uploads/2019/02/company_list_solar_water_heater_kits_2018.pdf