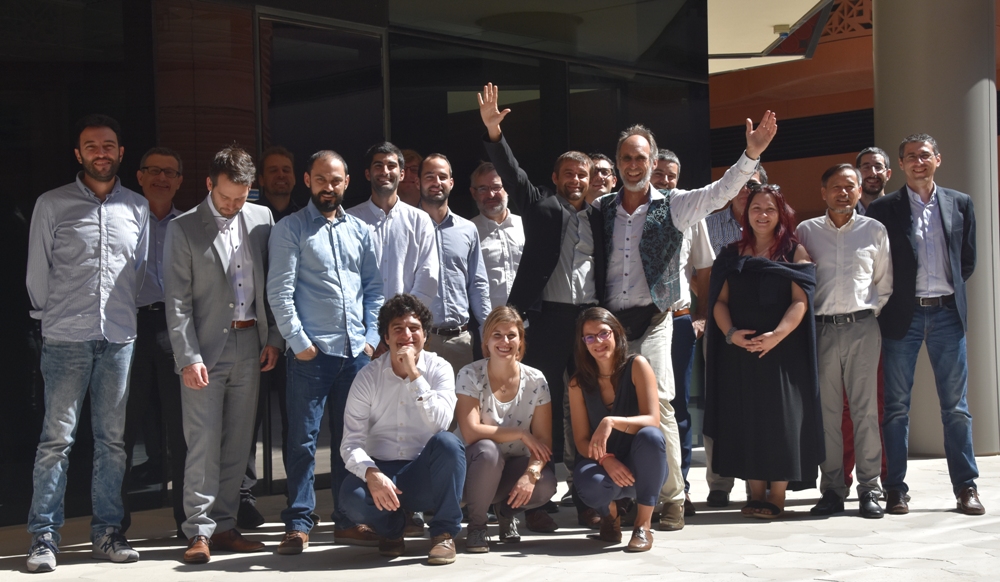 Despite Australia’s high levels of solar irradiation and rising energy costs, its solar heating and cooling market has been in decline each year since 2010. The newly installed glazed and unglazed collector area went from a peak of 1.14 million m2 in 2009 (798 MWth) to 544,670 m2 in 2016 (381 MWth) – less than half of what it used to be. Reversing the downward spiral is the aim of an industry roadmap, titled Solar Heating and Cooling in Australia´s Built Environment, which was commissioned by ARENA, the Australian Renewable Energy Agency, and is currently under review. During an internal workshop in Abu Dhabi last November, Australian-based consultancy Coolgaia discussed the findings from the roadmap with solar cooling experts working on Task 53 of the IEA Solar Heating and Cooling Programme (see photo).
Photo: Task 53
Heating and cooling demand on the up
The roadmap outlines the unique situation of Australia’s built environment, which has led to a constant increase in heating and cooling demand (see also the attached paper):
Rising energy consumption in Australia: past – current – future (PJ = petajoule)
Source: Attached paper, submitted at SHC 2017 in Abu Dhabi in November 2017
State of the SHC market
The solar heating and cooling data paints a rather grim picture of the market:
Barrier analysis
The attached paper lists several barriers responsible for the negative trend on the market:
Three-pillar approach
“With this roadmap, we look at the current environment and suggest measures that we can implement realistically now and not in the long-term future,” Marc Sheldon, Managing Director of Coolgaia, explained during the Task 53 workshop. The roadmap’s authors recommend a three-pronged approach (see the following table).

The support measures focus on facilitating access to financing, rather than calling for direct subsidies, which are difficult to enforce politically. Environmental upgrade agreements, or EUAs, for example, should be in use all around the country. These EUAs, which consist of contractual agreements with a local council and a finance provider, allow building owners to obtain capital at a rate that is lower over the longer term than the one on a conventional bank loan. Under an EUA, the finance provider agrees to advance capital to the building owner for funding environmental upgrades to a building, capital that will be repaid via council rates. According to the roadmap’s authors, on-bill finance should be extended to include the standard demand-management practices of all electric utilities. In this case, the utility prefinances energy efficiency upgrades and receives monthly payments equal to or less than the energy saved by the building owner.
The roadmap is part of PUSCH, a project Promoting Use of Solar Cooling and Heating in Australia, which is being implemented and financed by ARENA, Coolgaia, CSIRO – Commonwealth Scientific and Industrial Research Organisation and AIRAH – Australian Institute of Refrigeration, Air conditioning and Heating. The roadmap is said to be published in the course of the first quarter of this year.
The international research cooperation Task 53, titled New Generation Solar Cooling and Heating Systems (2014 to 2018), has brought together researchers from 10 countries. The final task meeting is scheduled to take place in mid-April in Dresden, Germany.
Organisations and projects mentioned in this article:
http://task53.iea-shc.org/
http://www.iea-shc.org
PUSCH project: https://arena.gov.au/projects/promoting-use-solar-cooling-heating-australia-pusch/
ARENA: https://arena.gov.au/
CSIRO: https://www.csiro.au
http://www.airah.org.au/
https://solarthermalworld.org/wp-content/uploads/2018/02/swc2017_shc2017_roadmap_australia_paper.pdf