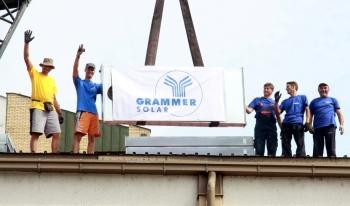 In spring 2012, a solar air collector system was installed on the roof of the gymnasium at the primary school “Dr Jovan Cvijie” in Smederevo, Serbia. The panels were set up to ensure regular heating and ventilation of the hall, as well as hot water in the showers. This first air collector project in Serbia was realised in the context of an environmental project, which aims to increase the use of renewable energy in the city’s public buildings.
Photo: Danone Solar

The, in total, 40 m² of collector area were set up on the roof of the gym in two rows at an angle of 45°. The system is composed of JumboSolar air collectors of German manufacturer Grammer Solar. The solar-heated fresh air warms, as well as ventilates the halls directly when needed. If no heating is required, the system automatically switches to water heating. The warm air flows over a so-called “SolarBox” with an integrated air-water heat exchanger to warm up the water for the showers. The solar system is going to cover nearly 30% of the gym’s heat demand and more than 80% of the hot water needs.

The company that planned and installed the system was local collector manufacturer and Grammer Solar partner Danone Solar. Danone has been trying to increase the awareness of solar energy in Serbia by integrating solar systems into public facilities. Already in 2011, the manufacturer set up water-based collectors at a Serbian nursery. Among other things, the panels cover the hot water demand of the central kitchen, in which 4,500 meals are prepared every day for all of the nurseries in Smederevo.

“Right now, we are working on a design for the open-air swimming pool in Smederevo, which will be heated by water-based flat plate collectors,” says Violeta Stojkovic from Danone Solar. “We have already acquired the funding for the project.” While the above-mentioned air collector installation was financed by the city of Smederevo, the projects with water-based systems are subsidised with grants from the Serbian secretary of energy. “We hope that in the future, solar air collectors will be funded as well,” says Stojkovic. “We have made a lot of efforts to promote air collectors. There is a great interest in this technology in Serbia.”