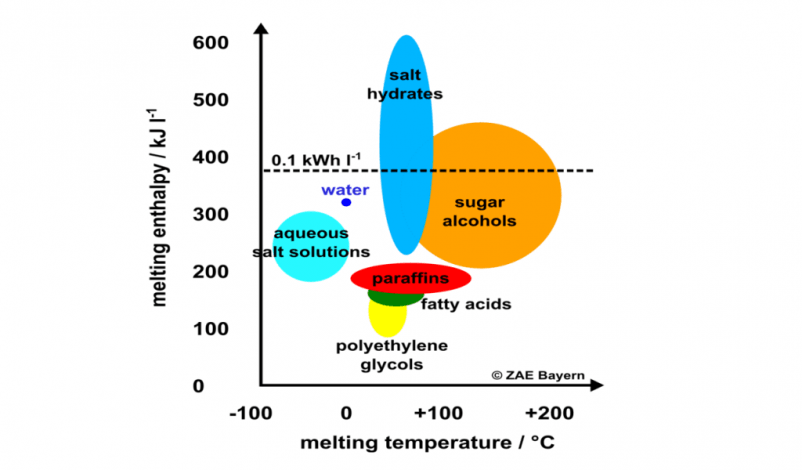 Salt hydrates are the most interesting phase change material in the low-temperature range of up to 150 °C. Their volume-related enthalpy at melting is much higher than the enthalpy of paraffins and sugar alcohols (see the chart above) and they are comparatively inexpensive. This is why the ZAE Bayern research institute based in southern Germany has been mixing salts and hydrates to create cost-effective phase change materials (PCMs) for several application areas. As part of a Solar Academy webinar held by the IEA Solar Heating and Cooling programme in November 2019, Christoph Rathgeber, a research assistant with ZAE Bayern and a member of its Thermal Energy Storage group, explained his methods for finding new materials. ZAE Bayern is one of the research organisations participating in IEA SHC Task 58, Material and Component Development for Thermal Energy Storage. A recording of the webinar and the presentations given at the event are available here. Another article about the Task 58 webinar can be found here.
Source: ZAE Bayern
The great challenge of developing phase change materials is that they provide a large amount of heat in a narrow temperature range close to the transition point, usually when a solid material turns into a liquid and vice versa. This means that the melting temperature of the material must be in line with the requirements of a given application. The best-known PCMs today are water-ice, with a melting point of zero degrees, and heat packs containing salt hydrates, which change phase at about 58 °C.
ZAE Bayern has also had good experiences with calcium chloride hexahydrate (CaCl2.6H2O) because of its reliability and its melting point of 29 °C. “Based on its cycling stability, costs and energy density, we can recommend the use of CaCl2.6H2O in the low-temperature range. A PCM storage tank made of this material has been in operation at our facility for several years,” Rathgeber said.

Rathgeber and his colleagues screened over 100 different mixtures to find new, cost-effective and advanced PCMs for other temperature ranges. Since much is already known about mixtures of salts and hydrates, they focused on those comprising three components: two types of sold and water.
ZAE Bayern’s three-step approach
First, the ZAE Bayern researchers created three-dimensional solid-liquid phase diagrams of different mixtures of salt, salt and hydrate. These charts indicate if all three components of a mixture melt or solidify at a single temperature, i.e., if they are eutectic systems, which they need to be if the goal is to find a phase change material which can run for many cycles (see the chart below). The chart depicting the solid-liquid phase also shows the concentration of all three components at the equilibrium point. 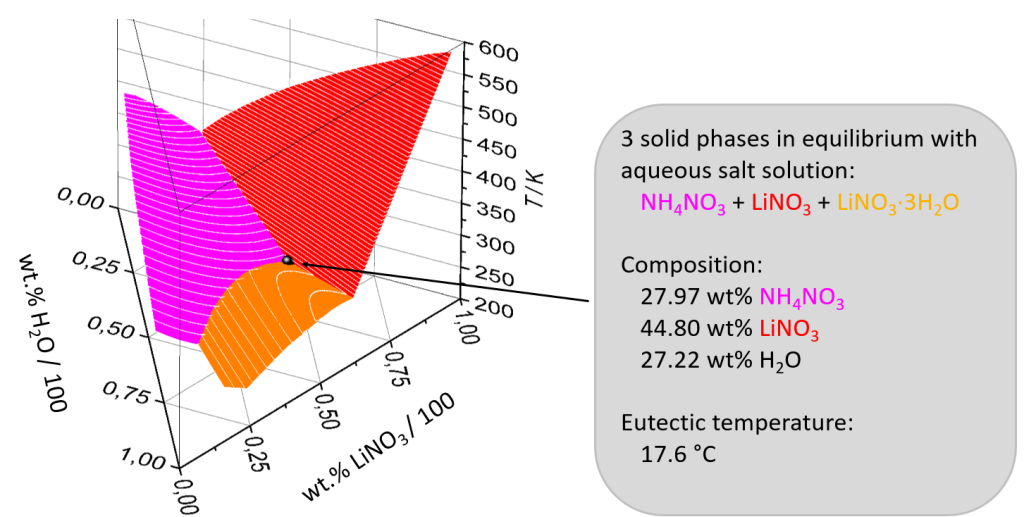 Results of mixing lithium nitrate and ammonium nitrite oxide with water.
Source: ZAE Bayern
Second, the theoretical composition of salt-salt-hydrates needed to be verified through experiments. “We performed calorimetric measurements and plotted the enthalpy over the temperature range. A mixture that has a single and quite narrow range at its melting point is a eutectic system,” Rathgeber explained during the webinar. Adding 2 kelvins a minute was used as a suitable compromise between accuracy and calorimetric measurement time to see if the phase transition occurs in a single step.
Third, thermal cycling tests were conducted to rate the long-term performance of new materials. “It is very useful to observe the melting process visually to identify phase separation,” said Rathgeber. Therefore, the researchers put each mixture into a transparent bottle and took photos while heating the sample and then cooling it in a bath. Overall, mixtures of salt, salt and water should not be prone to phase separation if calculations are correct and the solution contains the right amount of each component. 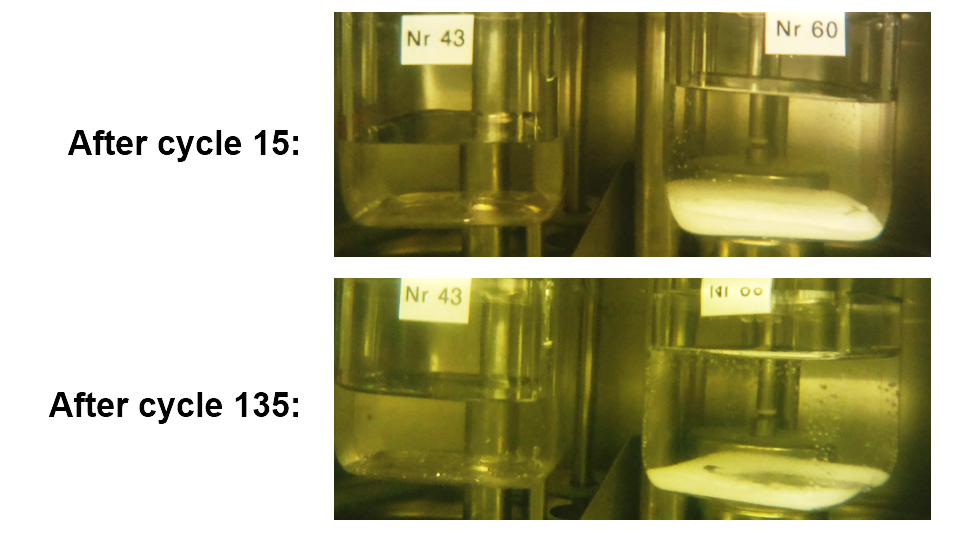