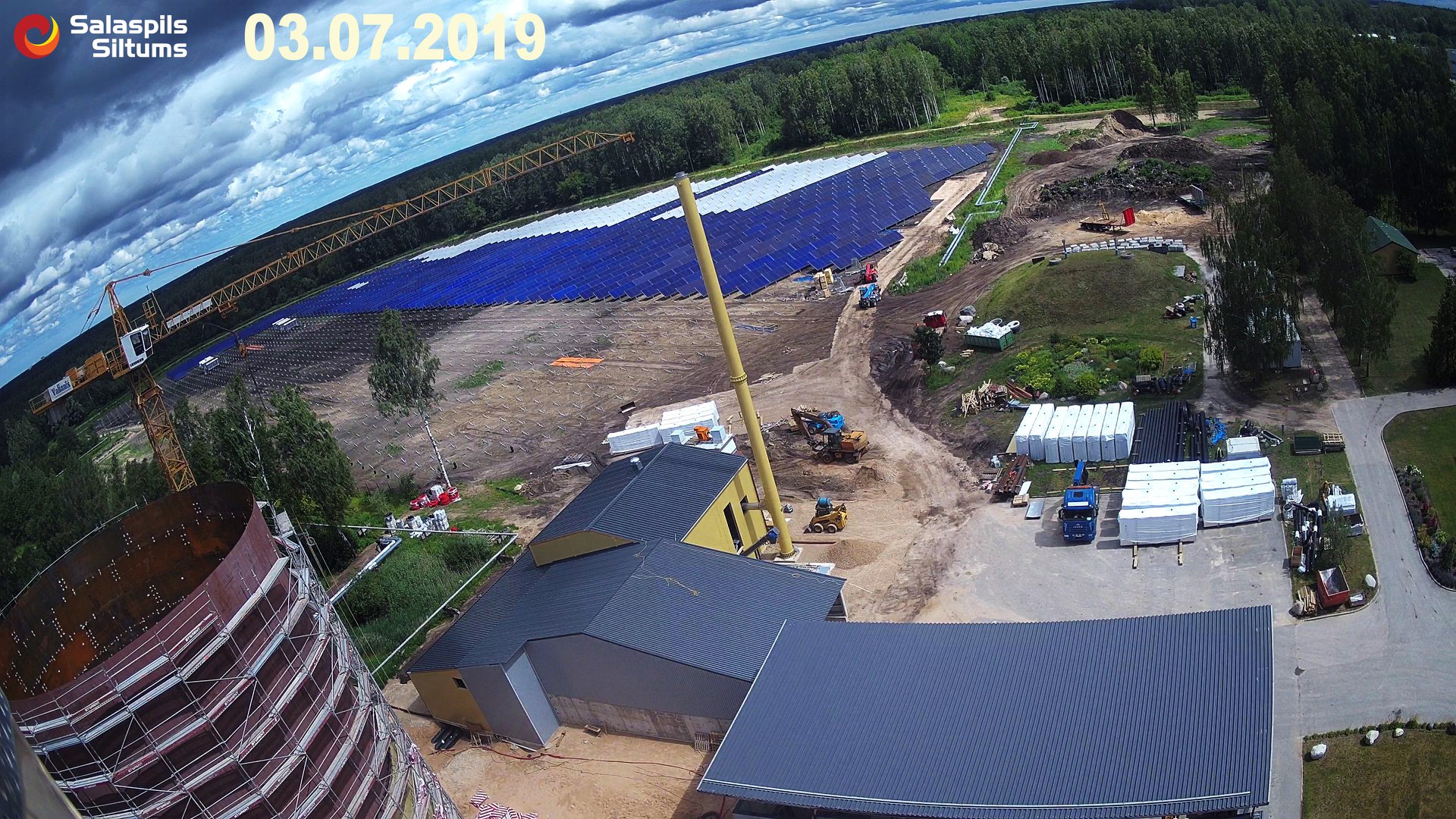 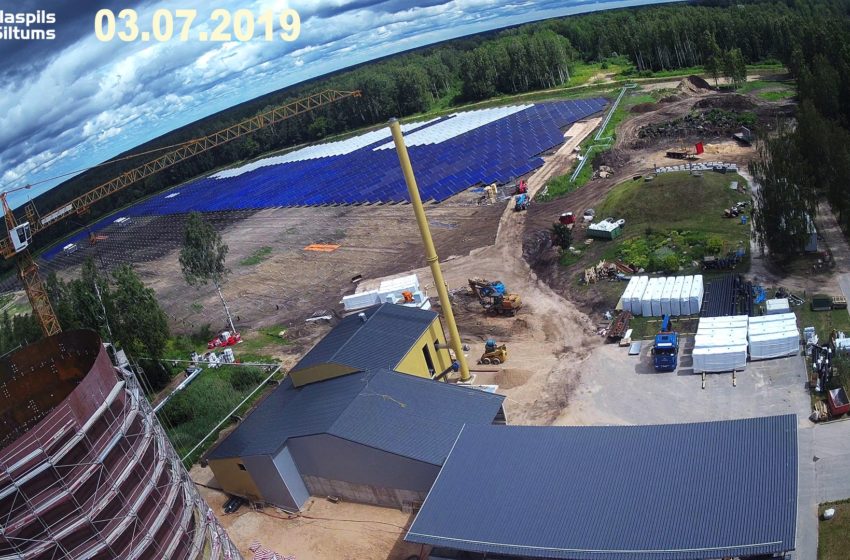 The solar field for Latvian energy utility Salaspils Siltums is growing rapidly in size, as the utility’s Facebook page shows. As recently as mid-June, the site had been little more than an empty space. But construction got under way quickly: Two weeks later, half the area was covered in collectors (see the photo above). Responsible for the construction is the Danish -based collector producer and turnkey system supplier Arcon-Sunmark in cooperation with the local plumber Filter. The system will also include an 8,000 m3 storage tank (visible in the left of the photo). Commissioning is scheduled for September.
Photo: Salaspils Siltums
Salaspils Siltums provides district heat for 85 % of all households in a town with a population of about 17,000. So far, most of the 60,000 MWh these households need each year, has been supplied by a 7 MWth wood chip boiler. The idea for the 15 MWth solar system was born while utility representatives were visiting Denmark in 2014. “Denmark inspired us. It is the leader in solar district heating and has the same irradiation than Latvia of around 1,100 kWh/m2,” said Ina Berzina-Veita, Managing Director of Salaspils Siltums.
Salaspils Siltums said the total investment in the solar field, including the storage tank, would be EUR 4.9 million. This corresponds to specific collector field costs of 226 EUR/m2, which are slightly above the benchmark costs of 200 EUR/m2 for solar fields above 10,000 m2 on green pastures in Denmark. The utility received EU co-funding of EUR 1.9 million
“Solar heat will meet around 20 % of yearly heat demand in Salaspils,” said Jevgenijs Sulga, Production Manager at Salapils Siltums. In simulations, the specific annual solar yield is said to reach 533 kWh/m2. The Latvian utility is also planning to install a 3 MW wood chip boiler, so that at the end of the project, the system can meet 90 % of annual heat demand by using renewable sources of energy.
Well-subsidised SDH systems in Tibet
In addition, in a 24 June press release, Arcon-Sunmark announced it would build a large SDH system in another part of the world: the Tibetan town of Zhongba. The contract for putting up a 34,650 m2 solar field and a 15,000 m3 seasonal storage tank for the town has been awarded to Arcon-Sunmark Large-Scale Solar Systems Integration, which is a joint venture between Arcon-Sunmark and China’s largest collector manufacturer, Sunrain.
It will be Tibet’s third SDH plant to be funded entirely by the central government. The first, which was commissioned in Langkazi in late 2018, was installed by Arcon-Sunmark’s joint venture as well. The second, a parabolic trough collector system manufactured by Chinese-based supplier Vicot, is now under construction in Shenzha. Furthermore, Aaron Feng Gao, Managing Director of Arcon-Sunmark Large-Scale Solar Systems Integration, said his company had plans to put up an additional three SDH systems in another three Tibetan towns, namely Angren, Gangba and Saga.
Organisations mentioned in this article:
http://arcon-sunmark.com
https://salaspilssiltums.lv/lv/en/about-the-company.html
http://en.sunrain.com
http://www.arcon-sunmark.cn
http://www.filter.lt/en/