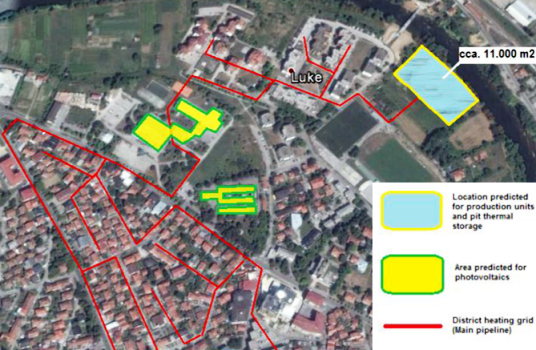 In early 2016, EU-funded CoolHeating began using the know-how acquired during best practice projects in Austria, Denmark and Germany to help with the implementation of small modular renewable heating and cooling grids in southeastern Europe. In mid-March, the CoolHeating partners published seven prefeasibility studies of district heating and cooling across five municipalities in Bosnia and Herzegovina, Croatia, Macedonia, Serbia and Slovenia. Because of geographical features, most projects favoured biomass, but solar thermal does play a crucial role in the proposals created for the Bosnian town of Visoko (see map) and the Croatian city of Ozalj.
Source: CoolHeating
“In the Balkans, renewable energy projects have yet to become as commonplace as in central and western Europe,” said Dominik Rutz, Project Manager of CoolHeating at Munich-based WIP Renewable Energies. In Austria, Denmark and Germany, several operators have already integrated solar thermal or wood chips, or both, into their DHC networks while the market in southeastern Europe is still in its infancy. “In cooperation with local CoolHeating partners, we’ve tailored the systems to the geographical, meteorological, technical and economic potential of each site,” Rutz explained. It was for this reason that the studies of all seven sites in the five communities were drafted individually, resulting in distinctly different installations.
Visoko: Average heat price of 45 EUR/MWh, no connection charges
In Visoko, in Bosnia, the SDH system would consist of a 5,000 m² collector field and 13,500 m³ of seasonal pit storage. Along with 6.3 MW of water-to-water heat pumps, this system would meet the baseload of a new network. A 3.1 MW gas boiler would provide backup at peak demand and an 800 kWp PV generator would supply solar-sourced electricity. The authors of the prefeasibility study based their calculations on a connection rate of 100 % regarding public buildings and 80 % in the case of single-family houses.
Turnover would come from the sale of thermal energy and solar electricity, with the former contributing 88 % and the latter 12 % to the overall amount. The base price proposed for heat supply was 45 EUR/MWh. There would be no charge for connecting to the network, but it has been suggested that each customer should be required by contract to buy at least 3,500 kWh per year. Implementing the idea would mean that, over a maximum of 10 years, heat consumers would have to pay 51.13 EUR/MWh for each year they fail to fulfil the requirement.
Ozalj: EUR 21.6 million for biomass-solar DH system
In Ozalj, amidst a sea of trees, the global horizontal irradiation exceeds 1,200 kWh/m²a, making the town particularly suitable for a system combining biomass and solar. The study’s authors suggested a 10 MWth biomass-fired CHP unit, an 18,000 m² collector field and 20,000 m³ of seasonal pit heat storage, plus a 26 MW gas boiler for peak loads. There was enough space to set up the installation close to the city’s industrial area, they stated.
Investment in biomass and solar district heating in Ozalj, Croatia [in EUR].
Source: CoolHeating
The EUR 21.6 million system would be feasible if calculated at consumer prices of 70 EUR/MWh for heat and power. The business plan put the internal rate of return at 12 % and the payback period at 9.7 years, based on a 15-year simulation.
Until the end of this year, the preliminary project proposals need to be finalised, after which it will be up to the mayors and city councils to implement them. Provided they have or can get a solid funding base to invite tenders, those projects could also be of interest to solar thermal companies in western Europe. Rutz is hoping for many to be realised, as each implemented project could serve as a showcase to promote small, modular renewable heating and cooling grids in the Balkans.
Organisations mentioned in this article:
CoolHeating: coolheating.eu