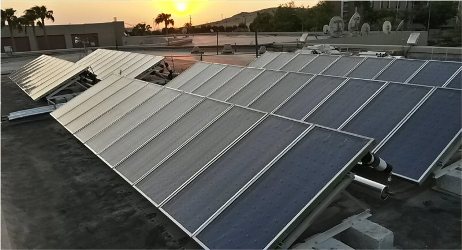 With a solar radiation of up to 2,550 kWh/m², Saudi Arabia seems destined to be a frequent user of solar thermal energy. Solar heating and cooling, however, are not very common in the Kingdom. A new housing programme launched by the government is now adding solar water heating to the list of eligible technologies, albeit companies selling to Saudi Arabia have so far only reported a small number of prestigious projects. The photo shows a solar cooling demonstration plant at the headquarters of the kingdom’s oil company, Aramco, in Dhahran. The system, which came into operation in November 2014, offers high-vacuum flat MT-Power panels by Swiss manufacturer TVP Solar and runs a double-effect absorption chiller with 180 °C to produce cold air for Saudi Aramco’s Al-Munirah Community Library. Still, solar thermal energy seems to remain a niche market in the eyes of the government, which has just published a new energy strategy for the coming years – the policy document primarily mentions PV, CSP and nuclear energy to offset the rising domestic consumption of the nation’s main export commodity: oil.
Photo: TVP Solar

According to most experts interviewed by solarthermalworld.org, the market for solar thermal energy is extremely promising, but has its own special character. “It is more about prestige than about anything else,” Hassan André Kaboni, General Manager of DME Dehatec Middle East, told solarthermalworld.org. As energy prices remain at an extremely low level, there is no financial incentive which might be able to promote the uptake of solar water heating. According to a study published by the German-Saudi Arabian Liaison Office for Economic Affairs in August 2015, cost per kWh averaged around USD 0.035, in comparison to USD 0.35 in Germany or USD 0.19 in France. An online newspaper now put the future price of Octane 91 at USD 0.20, up from its current USD 0.12. Octane 95 will increase to USD 0.24 from USD 0.16. According to market insiders, this could be the first attempt to reduce the consumption of energy and other resources. A reduction of other subsidies in the energy sector might follow and make solar thermal energy more attractive.
What may also convince customers is the opportunity to show their environmental awareness to their neighbours. Saudi citizens might be easier to convince if their neighbour has already had a collector installed. “Individualism is not that important in Saudi Arabia,” Kaboni says. “Most people wear the same outfit as their neighbours, and if they see that there is a solar water heating at the house next door and it works fine and needs no maintenance, they might want to install one as well.”
Very few suppliers offer solar thermal systems
Payback periods of solar thermal projects, however, are too long to convince a buyer from Saudi Arabia. “Most people are not used to planning for periods of ten years or longer,” Kaboni says. Other experts doing business in Saudi Arabia agree with his experiences. Fast returns on investment are paramount. That may be a reason why, as Kaboni puts it: “Cheap is still far too expensive.” Even property developers try to produce returns as fast as possible. So if they include solar heating and cooling in their projects, they might prefer to buy a cheap alternative rather than a high-end product. Kaboni thinks that suppliers will have to adapt their products. Fortunately, he adds, Dehatec does not have to compromise on quality because they are offering highly durable solutions “made in Germany”.
There has not yet been any manufacturer of solar thermal equipment in the Kingdom, and there have only been very few solar water heater importers. The Saudi Arabia Solar Industry Association (SASIA) does not list a single STE supplier, Mariyah Jafferji, Marketing and Events Coordinator of the organisation, told solarthermalworld.org in 2015. Products from abroad are often designed to meet high standards not competitive on a price market as the one you’ll find in the Kingdom.
Prestige drives investor interest in renewables
But providers of high-quality equipment do not think it would be a good idea to compromise on that very same quality. “It is so easy to ruin your brand’s image,” warns a representative of a European solar water heater system supplier, who does not want to be named. But he agrees that low energy prices have been a severe obstacle to sales in Saudi Arabia. And while the Emirate of Abu Dhabi has stipulated obligatory standards for efficient building standards, the Kingdom has not yet presented such an initiative, as SASIA confirmed. The market insider also agrees that prestige is what drives investor interest in renewables. This is especially true when it comes to industrial applications. “We have been to a company which had an STE system at the entrance and a conventional power plant fuelled by gas in the back of the building,” he says.
Low oil price slows down Saudi economy and delays renewable projects
Because of the gloomy prospects during the current financial crisis, the market may lose some momentum. Jan Raschke, the architect from Gerber Architekten International who has been in charge of building part of the metro system in Ryadh, has observed that construction activities have already been on the decline across the Kingdom. According to him, the low oil prices might promote change – forcing Saudi Arabia to develop a business model not merely based on oil. But in the short term, the crisis means that projects will be stalling and reduced to the priorities the country has set. That might be bad news for the STE market, considering that solar thermal energy has so far never been at the top of the list. Overall economic development is not encouraging either: The International Monetary Fund expects Saudi Arabia’s economy to slow down in 2016 – with a growth rate of only 2.2 % and a current account deficit for the second year in a row. The future of the SWH market might be less sunny than one would expect in a country such as Saudi Arabia.
Companies and institutions mentioned in the article:
http://www.tvpsolar.com
http://www.dehatec.com
http://www.gerberarchitekten.de/en/&nbsp;
http://www.saudi-sia.com
This news was written by Vanessa Kriele, a German freelance journalist specialised in renewable energies and world economics.