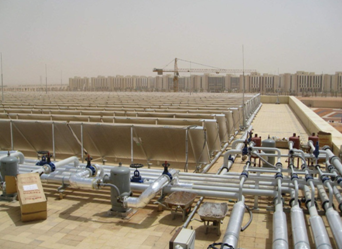 Since July, the currently world’s biggest solar thermal plant has gradually come into operation. It produces heat for a women’s university in Saudi Arabia, the Princess Nora Bint Abdul Rahman University inaugurated at the end of 2011. From July onwards, students and staff have been moving onto the campus and with heat demand increasing, the covers have been removed one by one from the six solar fields. The photo shows the collector field on a warehouse – the buildings in the background all belong to the university.
Photo: AEE Intec

With a total collector area of 36,300 m2 (25 MWth), the solar plant is almost twice the size of the so-far largest plant in Marstal, Denmark. It feeds the solar energy into a district heating grid that covers the heat demand of about 40,000 students and 20,000 female staff members. The maximum output of the solar plant is 25 MWth in summer, whereas the heat demand is around 30 MWth during the same period. To cover the rest, eight oil boilers with a total capacity of 75 MWth have been installed in addition to the solar system. The plant was designed and built as a marked-off craft, which ends at the heat exchanger of the district heating system, so little can be said about heat demand profiles or solar coverage figures.

As with most big solar thermal installations, this project is based on Austrian know-how. Manufacturer Greenonetec supplied the collectors and AEE INTEC designed the primary solar loop, including field hydraulics, stagnation behaviour and safety features. However, the consulting and engineering company responsible for setting up the plant is located in Jordan: Millennium Energy Industries. Millennium will also monitor solar yields during the first year.

The system’s hydraulics incorporate some new ideas: It is the first system equipped with Greenonetec’s new collector GK 3000, which was designed in cooperation with AEE INTEC especially for larger plants. The 10 m² include four parallel meander pipes. Meanders enable parallel installation of several collectors without provoking notable differences in flow distribution. “We defined a maximum ratio of 1.5 between the highest and lowest flow rate in the parallel absorber pipes of one row of collectors, so we can be sure to avoid partial stagnation in the collector field,” says Christian Fink from AEE Intec. Using the low-flow principle and a Tichelmann piping makes it possible to place eleven collectors next to each other – an equivalent of 44 meanders, or 110 m2. The design saves a lot of piping work, requires less flow control valves and keeps costs down.

Usually, the collectors feed the heat into the return line of the district heating system. The grid’s return temperature is 72 °C, the feed-in temperature 92 °C. There are six tanks of 150 m3 each to store any excess solar heat. In addition, a three step protection system prevents the tanks from overheating: The first measure stores excess heat in the grid’s 9,000 m3 of water once the tanks are completely filled. If using the district heating grid as a buffer tank does not provide enough protection, the tanks will store excess heat at 110 °C. If this second measure still does not prove to be sufficient to store all excess heat, a dry cooling tower will try to keep the solar systems’ temperature below 120 °C. However, this last step will likely be an exceptional situation.