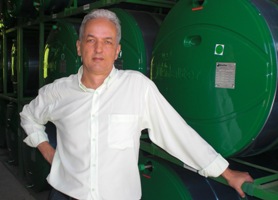 A very successful campaign for solar thermal technology is the Cidades Solares (Solar Cities) in Brazil. There were two major associations that initiated the campaign in 2005: DASOL/ABRAVA, the association of the solar thermal industry, and the international network Vitae Civilis. The campaign’s two main objectives are to implement solar building codes at the provincial, as well as municipality level and to organise training for engineers, architects and representatives of local authorities. Solarthermalworld.org spoke with Carlos Arthur A. Alencar, President of the association DASOL/ABRAVA and managing director of the solar thermal manufacturer and system planner Enalter Engenharia Indústria e Comércio, about the campaign’s activities.

Why does your initiative Cidades Solares focus on municipalities as a key element?

Alencar: In Brazil, decisions on building laws are mostly made at the municipality level. As we have no fewer than five regions with 5,564 municipal districts which themselves possess very diverse demographic and climatic characteristics, the programme Cidades Solares is a campaign that directs its work to the main and strategic cities, expecting its effects to spread across the regions.

How successful was the campaign so far?

Once you set the ball rolling, has it got faster?

Alencar: In fact, the São Paulo law from July 2007 highly increased the awareness among policy makers. The city has 19 million inhabitants and a GDP of US$ 102 billion. Its authorities made solar water heaters a mandatory part of new buildings, for both residential and non-residential estates – applying the by-law to hotels, sport clubs, schools, swimming pools restaurants, etc. It is our hope that the created awareness will help to spread our campaign faster than before.

Is refurbishment part of the solar building codes?

Alencar: Each law is a particular obligation in itself, but most of them apply to both residential and commercial sanitary installations that have a demand for hot water. I think that, in most municipalities, refurbishment could be part of the solar building laws as it needs to be approved by the city hall. São Paulo’s law works in that way, for example. Commercial applications would also be considered if the building itself is not a truly new one, but the operation permit is.

Driver of the solar thermal market: Brazil’s utilities have pledged to invest 0.25% of their net turnover in efficiency projects with a social background like the solar water heaters at this housing project. Photo: Enalter

We know from Israel or Spain, where solar building codes came into effect some years ago, that what is not controlled, will not be built. So how do you control whether the requirements of municipal solar building laws are fulfilled?

Alencar: First, the municipality controls whether the building permission complies with the law. After construction is complete, the owner has to get the “habite-se” certificate from a specific city hall department that declares the building as constructed according to approved plans and ready to be used. The Cidades Solares initiative is additionally starting a monitoring programme as a follow-up between plan approval and “habite-se”.

What is the role of the state governments?

Alencar: There are 26 states. None of them are allowed to implement solar building laws for residential or commercial buildings on their own. But they can devise obligations, so-called binding regulations, that require solar hot water systems for public buildings and publicly financed projects, such as schools, swimming pools, hospitals, asylums, rehabilitation centres etc. The state of Rio de Janeiro was the first to implement such a law in January 2008. The São Paulo State law is the next being processed. Several states have included solar thermal tenders for new social housing projects.

Have there already been perceptions on how the solar building codes influence the solar thermal market?

Alencar: We already felt the first effects in the cities, but they have been very difficult to quantify. For example, in São Paulo we are developing a method to analyse the impact on the market. The São Paulo law could have a huge local influence – maybe to 3 to 4 % of the national market – but it will still need time to achieve its full potential. You have to consider that the obligation just started and will affect only building permits approved after July 2008.

Nowadays, there is a second, significant impact on the market: the national regulation by the Brazilian Electricity Regulatory Agency (ANEEL), pledging electricity distributors to invest 0.25% of their net turnover in efficiency projects with a social background. Those projects are approved and controlled by ANEEL whose focus is on spending a greater part of the budget on solar thermal.