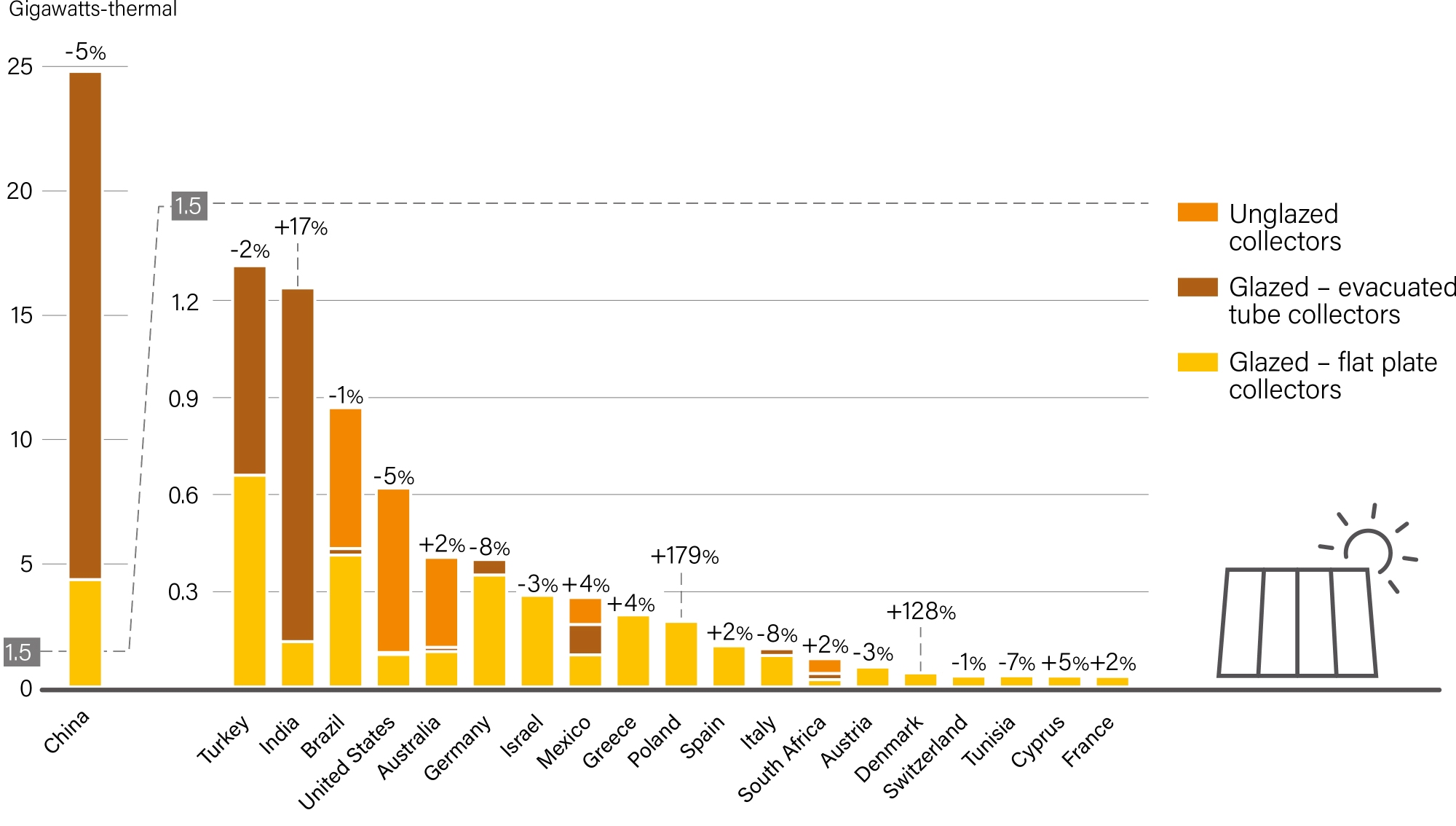 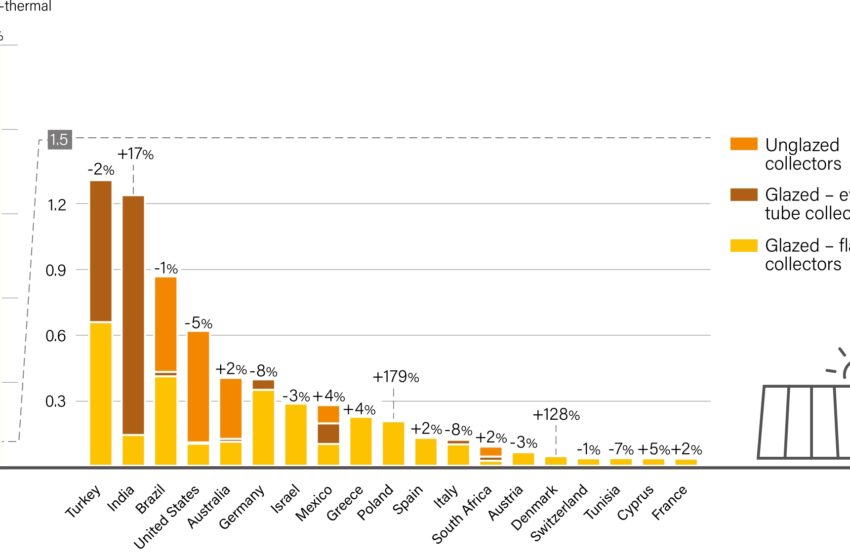 Approximately 33.3 GWth of new solar thermal capacity was commissioned in 2018, increasing total global capacity by 2 % to around 480 GWth. China accounted for about 74 % of global additions, followed by Turkey, Brazil and the United States. While China’s gross additions declined for the fifth consecutive year, the majority of the largest solar heating and cooling markets outside of China saw demand increase for the first time since 2015. The chart shows the gross additions in GWth in 2018 for the 20 largest markets.
Source: REN 21 Renewables 2019 Global Status Report
The list of the top 20 national solar thermal leaders remained largely unchanged in 2018, with some exceptions: Denmark and Cyprus (despite its small size) joined the ranks of the top 20 countries, while the island of Taiwan and Japan dropped off the list. Australia overtook Germany to rank sixth, and Germany fell to seventh place due to a steadily shrinking national market.
Overall, annual installations in 2018 rose in 10 of the world’s 20 largest markets – a positive development compared with 2017, when only 6 of the largest markets reported sales increases. A significant increase in annual installations was reported from three of the largest markets: Poland (plus 179 %), Denmark (plus 128 %) and India ( plus 17 %).
Poland broke all records with its 179% increase in solar thermal installations relative to 2017, which was a weak year due to delays in tender processes. New installations of 217 MWth in Poland in 2018, approached the level of Greece (230 MWth). Poland’s emissions reduction programme – which aims to improve local air quality – drove the country’s solar thermal market by providing municipalities with support for the installation of more efficient solar thermal and biomass heating systems. Several municipalities awarded contracts for tenders that were issued under the policy in 2017, yielding hundreds of new residential solar water heater installations. These market conditions for example benefited the Polish flat plate collector manufacturer Hewalex, which more than doubled its sales in 2018 compared to the previous year. According to Hewalex’s Marketing Manager Ireneusz Jeleń the company delivered around 4,300 residential solar water heater systems to seven municipalities over the year.
Denmark regained its lead as a role model for solar district heating installations in 2018 following a rather weak year in 2017. According to Daniel Trier from the Danish consultancy PlanEnergi 10 new SDH systems were put up in 2018 in Denmark, five of which were extensions of existing solar heating plants. This was a significant increase compared to the previous year when only two new SDH systems and three extensions started operation.
India’s demand for vacuum tubes rose in 2018, with imports from China reaching 5.8 million tubes, up 27 % over 2017. This increase was due to low prices of raw materials and to the resulting cost advantages of vacuum tubes compared to flat plate collectors. By contrast, flat plate collector sales in India dropped 46 % (147 MWth) from their peak in 2017 (278 MWth). The reduced demand for flat plate collectors was attributed to price increases that resulted from rising prices for copper and glass covers, both of which are key system components.
This news is based on the Solar heating and cooling market and industry chapter of the Renewable 2019 Global Status Report page 110 to 117. Use the searchable microsite to access the report: http://www.ren21.net/gsr-2019/
Read solarthermalworld.org news articles about the national market development 2018 in the following major markets: China, Mexico and Spain