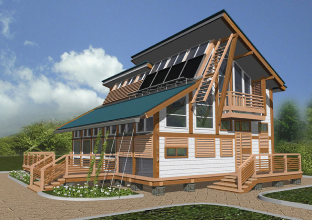 Russian architect and professor Pavel Kazantsev has won the Energy Globe Award for his solar-heated house Solar-5. The house has been adapted for the far east of Russia, around the city of Vladivostok. While the FEFU university in Vladivostok has already built a small version of the house, called Solar-5M, the first full-scale Solar-5 house for a private owner is now under construction as well. In a next step, Kazantsev and his team have decided to set up a model house, which will be open to the public.
Source: Pavel Kazantsev

The house design is based on wood frames. “It is not a masterpiece, but an ordinary house of the popular suburban construction type,” Kazantsev says. A Solar-5 house would cost about 15 to 25 % more than the conventional wooden houses in the area. According to Kazantsev, however, the investment paid off within only five to seven years.

Vladivostok is at the same latitude as Florence, but has harsher winters with average temperatures of as low as -17 °C. Still, sunshine is a reliable factor during the winter months: usually, there are no more than 10 to 12 cloudy days between November and March. Thanks to these favourable conditions, a Solar-5 house could cover 81 % of its energy needs through both active and passive solar gains.

The 15 m2 of the solar collectors are primarily used to heat water in the household. They cover 23 % of the house’s annual energy demand. The installation of additional vacuum collectors could contribute to heating as well. The heat is stored in a 750 litre water tank and its backup consists of a 6 kW electric boiler. Even at – 24 °C, the house does not lose more than 7.4 kW, which means that together, the passive and active solar gains and the electric boiler are enough to keep the house warm at all times.

Just by following some of the basic rules of energy-efficient building, the Solar-5 house also provides more comfort for its residents. Many of the houses built in the 1960s and 1970s are facing north and were insulated so poorly that the living rooms do not get warmer than 14 °C during the winter months. The Solar-5 houses, in contrast, can be heated to 20-23 °C all year round. As some regions of east Russia have permafrost, the house is built on pillars to not destabilise the ground.

Currently, there is no governmental support for solar thermal energy or energy efficiency in Russia´s east. Kazantsev considers it “out of the question” that this will change in the near future – the oil and gas pipelines there are just too profitable for the companies and governments involved. Still, private home owners are starting to get interested in solar thermal. According to Kazantsev, 5 to 7 % of the homes in Vladivostok´s suburbs are equipped with solar water heaters. Many of the solar collectors come from China – and also from Germany, as technology from the West has become trendy among the wealthier population.

Kazantsev designed the first solar passive house in the Russian region of Primorye in the 1990s. It was called Solar-1, but has never been built. Since then, he has designed several solar houses, including a multi-family house. Altogether, 17 of his projects were built. Among these projects, one solar and one partly solar supermarket, as well as two solar houses are going to be finished by the end of 2012. Two other houses are reconstructed according to passive house principles.

Kazantsev was professor at the Design Department of the Far Eastern National Technical University (FENTU) from 2006 to 2011 and is now a professor at the Architectural Department of the Far Eastern Federal University (FEFU). He is Silver Member of the International Solar Energy Society (ISES) and has received several awards for his projects and teaching. 28 of Kazantsev’s students have been able to claim regional, national and international awards.