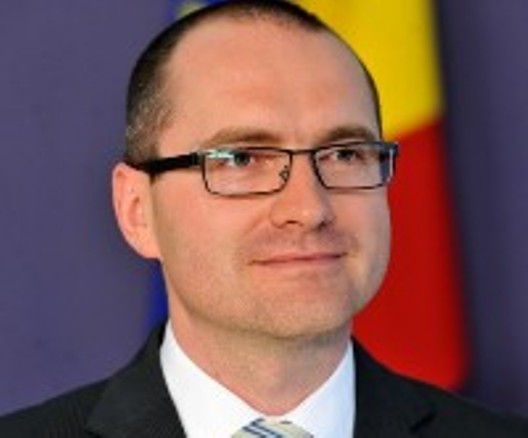 It looks like the Romanian solar thermal sector is benefitting from the frequent changes at the head of the country’s Ministry of Environment and Climate Change, MMSC. During a press conference on 20 May 2014, Attila Korodi, Minister for the Environment since the beginning of March 2014, announced the reactivation of the Green House Programme, Casa Verde, which was halted in 2011. As the former head of the same ministry, Korodi was responsible for the implementation of Casa Verde at the end of 2008. It took some time, however, until the programme could finally start in June 2011. During the press conference, Korodi said that he wanted to review the pending applications from 2011 and planned to subsidise 13,000 systems in 2014.
Photo: MMSC
The Green House Programme from 2011 subsidised residential solar thermal or biomass systems with Romanian Leu (RON) 6,000 and heat pumps with RON 8,000. According to Korodi, 14,162 of the 23,938 pending applications from summer 2011 had already been analysed and 81 % were approved. The other 9,776 applications should now be reviewed urgently and all approved applicants should be allowed to modify or resize their projects (see the attached press release in Romanian).
“We are aware that because of how much time has passed since the programme was stopped, there will be some discrepancies. However, our goal is to obtain financing for a large number of beneficiaries,” Korodi said during his presentation at the press conference. The minister invited all applicants to quickly submit updated applications. “I will personally ensure that we will work on them quickly. No delays will be tolerated,” Korodi added. Regarding the future of the Green House Programme, the minister´s announcement was rather vague: “Clearly, my wish is that the programme continues. Once we complete all pending applications, we will decide when to launch a new call for proposals. But at the moment, I cannot say with certainty whether we will have a new call this or next year.”
No official statistics on the solar thermal market
“Without the Green House programme and without other investments by the government, 2012 and 2013 were rather tough years for the solar thermal system suppliers in Romania,” Mihai Vintila, owner of both InfoEst.ro, a Romanian news portal, and a renewable energy consultancy, says. According to Vintila, market volume was stagnating or rather declining. But because there is no association for solar thermal, there are no official statistics on the solar thermal market either.
Hence, different market figures have been published. The statistics of the European Solar Thermal Industry Federation (ESTIF) from June 2014 show an increase in the Romanian market by 54 %, from 15,500 m² of newly installed collector area in 2012 to 23,850 m² in 2013. Vintila, however, disagrees with this estimate. ESTIF received the 2013 figure from the German-Romanian Chamber of Commerce. “We calculated the 2013 market volume in Romania based on information from EurObserver, local associations and leading solar thermal system suppliers,” Anita Uhr, Marketing Consultant at the German-Romanian Chamber of Commerce, confirms. EurObserver estimates a market volume of 20,000 m² in 2012, which corresponds to a 20 % market increase in 2013, a figure that market players doubt as well.
2014 might provide significant improvements: With a target of 13,000 Green House applications, market volume could grow to around 46,000 m² of subsidised collector area. Additionally, solar thermal system suppliers hope for a positive effect of the EU funds for energy efficiency measures at small and medium enterprises.
More information:
Ministry of Environment and Climate Change: mmediu.ro/new/
This news was written in cooperation with Mihai Vintila, owner of infoEst.ro, a Romanian news portal.
https://solarthermalworld.org/wp-content/uploads/2014/06/2014-05-20_romania_press_release_casa_verde.pdf