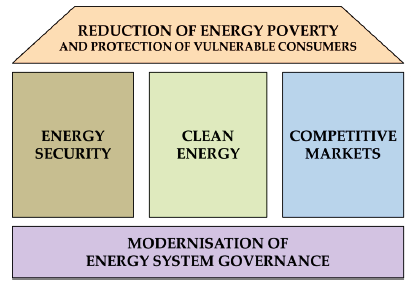 The Romanian Ministry of Energy has published a draft of its Energy Strategy 2016-2030, including an outlook until 2050. The roadmap is based on five strategic objectives, which have been combined to resemble a building (see figure on the left). The roadmap’s authors also propose several key areas for strategic intervention as described below. In 2007, Romania adopted a National Energy Strategy which will last until 2020. The new document will soon be subject to parliamentary debate and is expected to be approved by parliament in the first half of 2017. Both the English summary and the complete Energy Strategy draft in Romanian have been attached to this news article.
The publication of the draft was preceded by a series of workshops in the first half of 2016. Nearly 300 specialists took part in those workshops to assess the current national energy situation. “We aim for a well-functioning energy market with affordable high-quality services,” Radu Dudău, Energy Policy Group Director and advisor to the Romanian Ministry of Energy, said during the launch of the Energy Strategy in November 2015. “We have set three objectives that must be met simultaneously for any type of future energy supply: energy security, competitiveness and lower carbon dioxide emissions.”
PV capacity tripling until 2030 but no solar thermal targets
Usually, authors of energy strategy documents assume that the national potential of solar electricity is far greater than the one of solar thermal in the heating sector. The same is true for the Romanian Energy Strategy 2016-2030. One of the five key fields for intervention is power generation capacity, where the focus is clearly on photovoltaics and wind. PV electricity is to be tripled from today’s 2,026 to 6,610 GWh in 2030 and wind is to be increased from 6,972 to 11,742 GWh (see p. 55 of the document in Romanian). Conversely, solar heat is only mentioned in the introductory chapter: “Geothermal and solar panels are rarely found in Romania, although there is great potential for increased resource utilisation over the coming decades.” Policy advocates should be aware that if there are no targets for solar thermal, little effort will be made to increase deployment.

Energy sources of heating and cooling in the residential sector
Charts: Page 68 of the energy strategy / Legend: Translated into English
The energy strategy’s most important aim for heat applications is to develop a natural gas infrastructure and jump-start domestic gas production to significantly increase residential gas supply from 42 to 48 % in 2030 (see chart above). Biomass is expected to maintain its dominance of the market with a share of 25 % in 2030. Modernising district heating plants is one of the strategies explicitly mentioned in the new draft, although this will only increase the DH share in the heating market from 15 to 17 % in 2030.
This news piece was written in cooperation with Mihai Vintila, owner of InfoEst.ro, a Romanian news portal.
https://solarthermalworld.org/wp-content/uploads/2016/12/energy_strategy_2016-2030_full_version_in_romanian.pdf
https://solarthermalworld.org/wp-content/uploads/2016/12/romanian-energy-strategy-2016-2030-executive-summary3.pdf