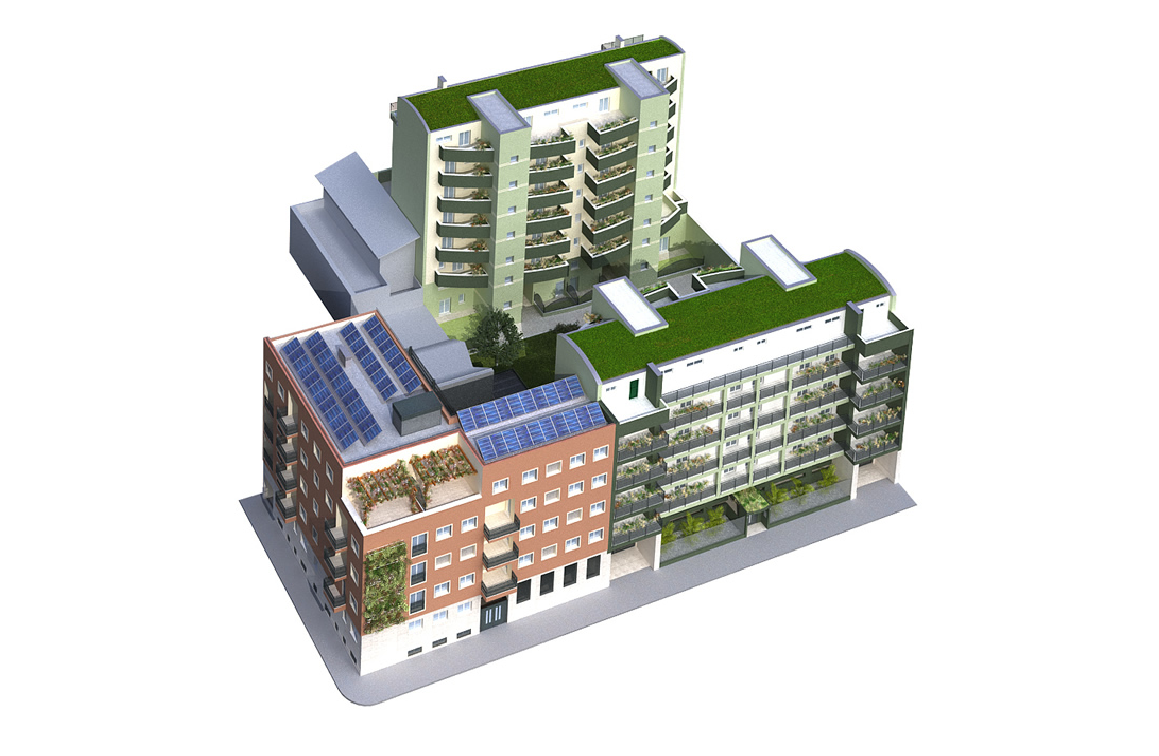 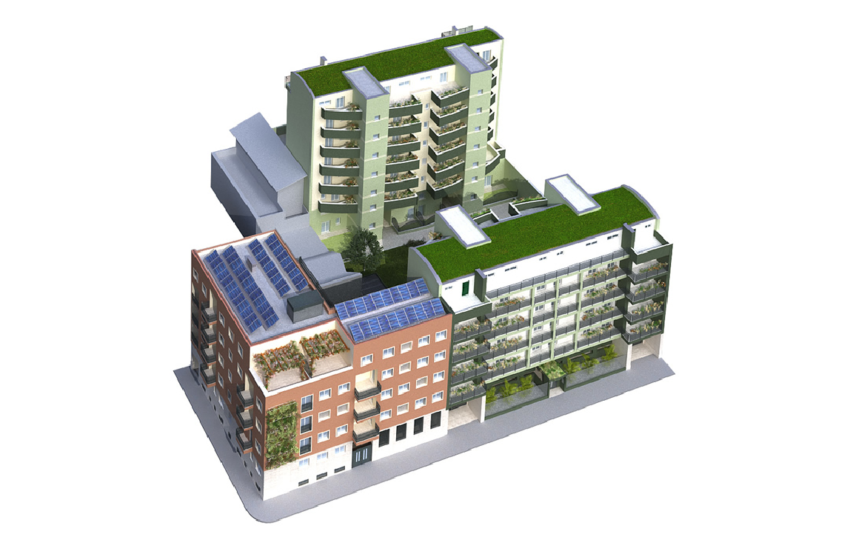 How much does it cost to construct, run and maintain a Nearly Zero Energy Building? What energy efficiency and renewable options could work best for a given project? Answering these and other questions is the aim of CRAVEzero.eu, a new, interactive online platform. It supports architects and planners during the design and construction process by offering a set of software tools to estimate how much money will be needed for a Nearly Zero Energy Building (NZEB) over its lifetime. One of the properties that have been analysed as part of CRAVEzero is Isola nel Verde, a block of flats in Milan, Italy (see image).
Image: Isola nel Verde
“We carefully examined the cost structure and planning processes of 12 NZEB demonstration projects in Austria, France, Italy and Sweden to identify a cost base for the purchase, maintenance and operation of different components, including heat recovery systems, solar thermal installations and building envelopes,“ said Tobias Weiss, who works as the project manager of CRAVEzero at AEE INTEC based in Austria. The lessons learned from implementing these showcase projects, which focus on multi-storey residential and office construction in Europe, have since been shared with the entire sector.
“Using real-world data from these demonstration projects, we carried out calculations for half a million variants, which you can search for online by going to the Interactive Case Study Dashboard,“ explained Weiss. The dashboard can be found on the CRAVEzero Pinboard, a web page that is currently being beta-tested and includes a number of tools offering support for planners of NZEB projects.

This chart shows the life-cycle costs of different variants for Isola nel Verde in Milan, Italy, in relation to their specific primary energy demand. Combinations which are subject to the same efficiency standards for building envelopes, heating and ventilation, and solar energy systems are highlighted in the same colour. For calculation purposes, it was assumed that loans would run for 25 years and carry 3 % interest at 2 % inflation and a nominal discount rate of 3 %.
Source: CRAVEzero
The chart above shows the life-cycle costs (LCC) of hundreds of variants for Isola nel Verde in Italy. Specific costs range from 2,800 to 3,600 EUR/m2 (factor: 1.3). The cost estimate for the actual building was 3,615 EUR/m2, split between 1,899 EUR/m2 (53 %) for the building itself and 1,716 EUR/m2 for its operation (energy, maintenance and similar).
Regarding primary energy demand, some variants even differ by a factor of 2. If Isola nel Verde had been constructed in line with common building regulations, which require the addition of an air source heat pump (green dots) but no ventilation system, primary energy demand would have been somewhere between 140 kWh/m2 and 210 kWh/m2 a year. The most environmentally friendly variants include 72 m2 of solar collector area and a 14 kWp PV generator (purple dots) and reduces yearly primary energy demand over the entire lifetime of the building to about 100 kWh/m2.
Dashboard for benchmarking project LCCs
“Calculating LCC variants is therefore a vital step in the integrated planning process of zero-energy buildings. Else, you run the risk that architects and engineers optimise components with only their specific area in mind and lose sight of shared goals,” said Weiss.
Variants including solar thermal systems (see the purple dots in the chart above) have the lowest life-cycle costs of all Isola nel Verde options. These systems may lead to a slight increase in the initial investment amount but will save annually increasing amounts of money because of rising energy costs over the 20-year lifetime of a collector. For example, in Europe, up to 50 % of the copper that is used as a key material to make solar thermal circuits can later be recycled. According to the European Copper Institute, recycling reduces energy consumption by up to 85 % compared to primary production.
Dashboard users can filter by building envelope, efficiency standard and heating or air conditioning system to find variants. “A great plus of the dashboard is that it lets you compare your building project with the variants available online, so you can see where you stand regarding life-cycle costs, as well as heat and primary energy demand,” explained Weiss.
Integrated design
The Case Study Dashboard is one of several functions provided by the CRAVEzero Pinboard. Another website feature is the Interactive Process Map, which shows the design process of NZEBs. Integrated design is essential to their construction; in this context, integrated means engineers and architects work together closely to develop the most innovative and effective solution for a given project and monitor compliance with standards and practices during its implementation. Process diagrams are then used to help planners set out the responsibilities of each partner in the project, plus point out possible bottlenecks or weaknesses which have hampered previous endeavours.
Further information:
CRAVEzero project website: http://www.cravezero.eu
CRAVEzero Dashboard: https://www.cravezero.eu/pinboard/Dashboard/DBInfo.htm
Interactive Process Map: https://www.cravezero.eu/pinboard/PMap/ProcessMap.htm
European copper recycling: https://copperalliance.eu/benefits-of-copper/recycling/