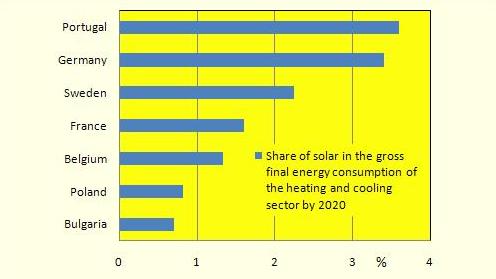 Some countries in Europe have made plans for using solar energy to cover between 1 and 4% of their gross final demand of heating and cooling by 2020. The states with the most ambitious targets regarding their national sector are Portugal, Germany and France.
Source: National RES Industry Roadmaps

The above-mentioned coverage of the heating and cooling demand is going to be fixed in the National RES Industry Roadmaps created under the REPAP2020 project. Thirteen European partners are currently supporting the national administrations and national industry associations in drafting their National Renewable Energy Action Plans (NREAPs), an effort which is coordinated by the European Renewable Energy Council (EREC).

The first seven countries on the list have already devised an industry roadmap, which lasts until 2020 and can be downloaded at: http://www.repap2020.eu/index.php?id=23. All of these roadmaps were drafted by the respective national renewable energy associations, for example EDORA, the federation of renewable and alternative energies in Belgium, or the Renewable Energy Federation (BEE) of Germany. They were then discussed on national workshops, which were moderated by experts from EREC, based in Brussels.

Solarthermalworld.org analysed these roadmaps by focusing on objectives specifically intended to support the solar thermal heating and cooling sector. The chart above shows the fixed share of solar thermal energy compared to the – then reduced – gross final consumption of energy in the heating and cooling sector. With 3.6%, Portugal is the country aiming for the highest share in its sector. Bulgaria, on the other hand, only expects a share of 0.7%, the lowest so far.

Figure 2: Scenario for the growth of the solar heating and cooling sector in certain European countries up to 2020. The average annual growth rate between 2011 and 2020 is given in brackets next to the country name.
Source: National RES Industry Roadmaps

Figure 2 shows the growth curve of the solar heating and cooling market in certain countries in Europe. Apart from Germany, all of the reviewed began with a very low number of installations.

Therefore the growth curves remain fairly flat, although highest growth being achieved in Sweden (37 %) and Belgium (26 %). Both Germany and Bulgaria seem to follow a very conservative path with annual growth rates of only 14 %. The important thing with these scenarios is to again remark that they were drafted by the respective national industry associations. The governments will most likely stay below the associations’ growth scenarios, which means that the National Renewable Energy Action Plans would not contain objectives actually pushing the solar heating and cooling sector forward – a troubling development.