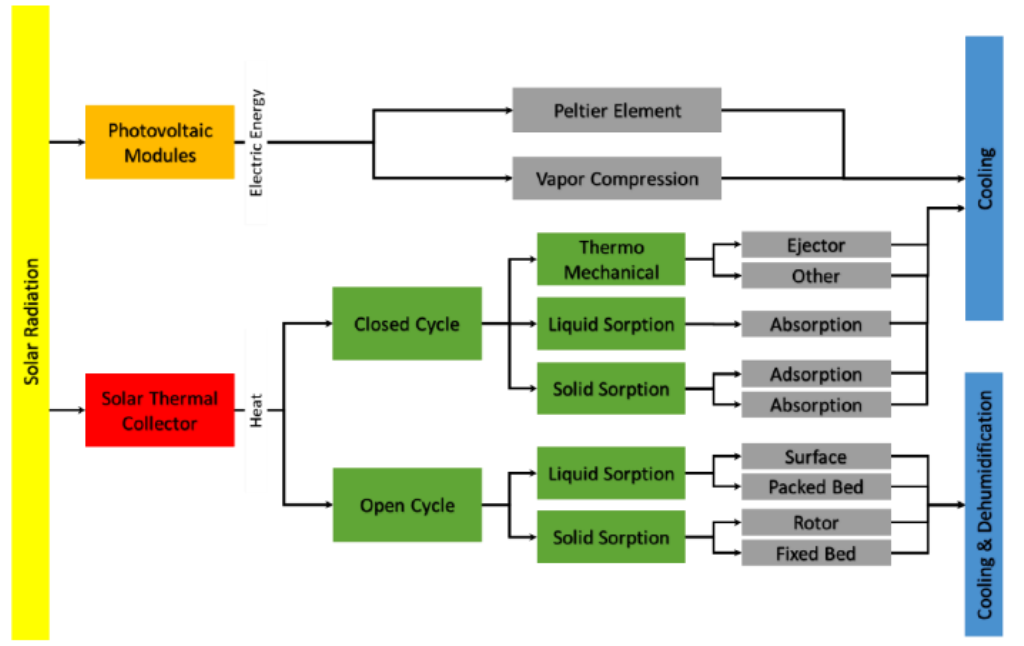 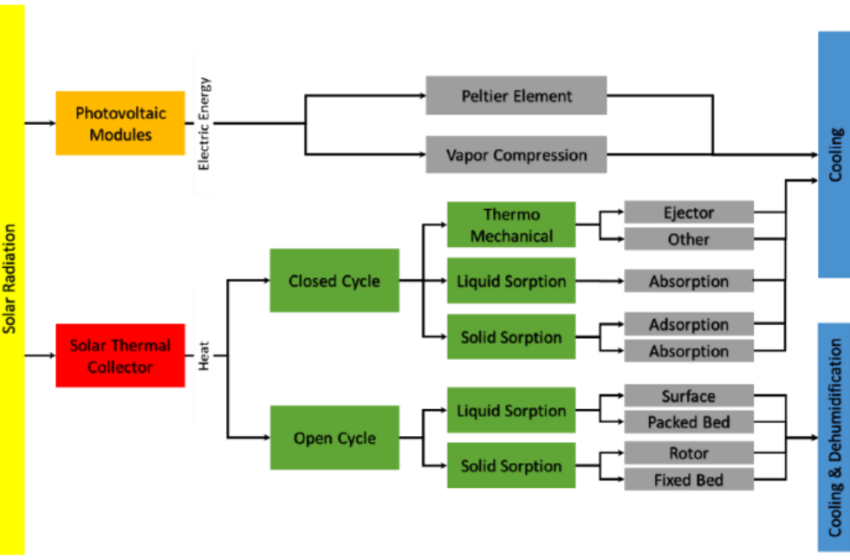 The latest generation of solar air conditioning systems comes in a vast variety of configurations. As shown in the diagram above, their source of energy is either solar heat or electricity. Some include storage tanks and can provide hot water or space heating in addition to space cooling. To support the deployment of standardised, cost-effective solar cooling installations, it will require a common method for assessing the technical and economic potential of these systems. One such method has been developed by researchers in Task 53, established under the auspices of the IEA Solar Heating and Cooling Programme. They assessed and benchmarked 17 devices for solar heating and cooling (SHC) in a total of 28 configurations. The cooling capacity of the systems ranged from 5 kW to more than 150 kW.
Chart: Task 53
“It is particularly important to use commonly available and comparable methods for assessing these entirely different types of configurations,” Daniel Neyer, a researcher who works at the University of Innsbruck in Austria, said during a mid-September webinar organised by Task 53. “TS53E4 is a tool we developed as part of Task 53 to offer energy, environmental and economic results based on monthly energy balances, either derived from measurements or simulated values.” The Excel-based program contains information about the efficiency and cost of solar heating and cooling (SHC) installation and the reference system. It will be available for download on the task website near the end of the year. A recording of the webinar and the presentations given during the event can be downloaded from the website of the IEA SHC Solar Academy.
The reference system comprises a natural gas boiler and an air-cooled vapour compression chiller. All key results have been provided in normalised form. This means that a specific reference has been selected to avoid a discussion about absolute values and the right choice of boundary conditions.
Two main parameters have been calculated from the monthly energy balance of each configuration:
“We then grouped configurations by boundary conditions, for example, whether the location is in the south or north, and identified separate lines for solar heat and PV,” Neyer said. Northern installations consist of those in Austria, Finland, Germany, Sweden and Switzerland. Sites in the south are found in Spain, France and China.
The southern locations depicted on the left graph below seem to show promising results, as between 40 % and 70 % of energy could be saved at a total cost lower than that of the reference systems. This amount of saving is possible for both PV (see dotted line) and solar heat (see continuous line). “If the industry can reduce system costs by only 15 %, energy savings could be as high as 80 % and the units would be cost competitive at southern locations,” Neyer explained.

Results of analyses using the T53E4 tool: The cost ratio is shown on the y-axis over the non-renewable primary energy savings fsav PER-NRE on the x-axis. The graph on the left shows the configurations at southern sites, where cooling demand dominates over the summer. The one on the right shows results from northern locations, where the need for cooling is lower during the same period.
Source: Task 53
The cooling systems at northern locations, where there is less demand for air conditioning (graph on the right-hand side above), paint an entirely different picture. Only if primary energy savings are kept to 40 % can systems be cost-competitive to references. Aiming for savings of between 60 % and 80 % will increase costs tremendously. According to Neyer, it was again the investment which had the strongest impact of all parameters. If investment costs are reduced by at least 30 %, cost-effectiveness could be guaranteed along the entire trendline.
Neyer summed up his findings by saying that the overall outlook is positive, considering he identified cost-competitive configurations that are possible even with today’s investment cost models. He said: “Both solar technologies can be optimised for solar heating and cooling. Whether PV or solar thermal is more beneficial will mostly depend on the location and the design of the system.”
Based on the SHC systems studied in Task 53, the researchers, developed 10 quality principles, about which they had intensive discussions with other SHC experts:
Principle 0: Reduce energy demand before using renewables
Principle 1: Choose applications where high annual solar utilisation can be achieved
Principle 2: Keep the process flowsheet simple and compact
Principle 3: Use efficient heat rejection units/systems
Principle 4: Minimise auxiliary demand
Principle 5: Avoid using fossil fuels as a backup for thermal-driven systems (especially for single effect ab-/adsorption chillers)
Principle 6: Apply appropriate resources to designing, monitoring and commissioning
Principle 7: Provide thermal storage capacity and hydraulics in a form that matches the thermal requirements of each energy demand
Principle 8: Minimise heat losses
Principle 9: Avoid over-dimensioning of the collectors
Principle 10: Design the ab-/adsorption chiller for relatively constant operation at near full load
The tool called TS53E4 and a report about the technical and economic assessment described in this news report will be available for download on the website of Task 53 at the end of the year: http://task53.iea-shc.org/publications